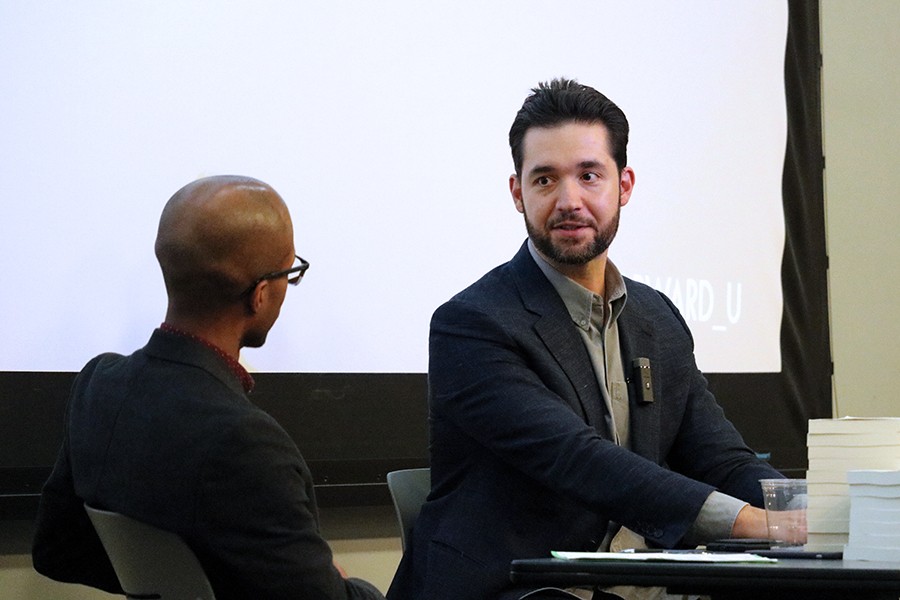 Chris Ohanian and Charlotte Exner showed up early to Hodson Hall, snagging aisle seats in the ground floor auditorium and heading to the lobby for slices of pizza. The couple was chatting happily about Exner's time as a graduate student studying education at Johns Hopkins and the time she spent teaching special education classes when their son, Alexis, strode over from across the lobby, greeting them warmly.

Alexis Ohanian, a giant of the technology and investment world, spoke at Johns Hopkins on Friday night about his experiences launching and running Reddit, the social aggregate news website and so-called "front page" of the internet. With more than 340 million visitors each month, Reddit is the seventh largest website in the world and is valued at $1.8 billion.

Dressed in a blue tailored blazer, an untucked button down, and a pair of Nike Air Max 270s, Ohanian spoke about his humble beginnings as a kid in Columbia, Maryland, with a love of coding and computers. He had "hoodwinked" his parents into buying a computer, he said, by convincing them he'd use it for educational purposes, but really he had a mind for playing PC games. After seeking advice from strangers on online message boards about writing code, he developed a penchant for HTML and began a cottage business creating websites for nonprofit businesses.

"No one knew I was this dorky kid in my parents' house in Columbia; they just knew I was someone who had a skill they didn't have," he said. "I was doing it for fun, but also mostly for pride. My parents didn't have a totally clear idea of what I was doing, but they trusted me, which is really important, and they gave me agency to do this. It unlocked something very entrepreneurial in me." 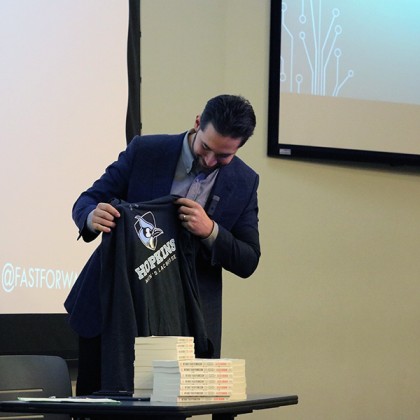 Image caption: Ohanian was presented with a Hopkins sweatshirt and a bear and JHU onesie for his newborn daughter

His wide-ranging talk was sponsored by FastForward U, an incubator and resource-rich development program aimed at fostering entrepreneurship among the student community at Johns Hopkins. Part of Johns Hopkins Technology Ventures, FastForward U provides funding opportunities, workspaces, and networking and workshop events to support undergraduate businesses.

During his talk, Ohanian discussed how the internet has changed the modern economy—something he grappled with personally when powerful airline and hotel accommodation websites upended his father's career as a travel agent—and how student entrepreneurs can find success through networking, collaboration, and taking advantage of programs like FastForward U that offer industry-specific business experience.

"There was no class for writing professional emails in school," he said, describing the first promotional email he ever wrote to a reporter—which was overly formal and impersonal. "There is this weird gap—you have this very expensive, great education, but there were a bunch of fundamental things that I managed to come out of school without."

He instructed business-minded students in the audience to default to "yes" in professional situations, and to go into meetings with the primary mindset of being helpful. He said that even the most thoughtful and strategic planners won't be able to map out their entire business trajectory, and that optimizing for "yes" will open up different avenues for collaboration and opportunity.

In that spirit, he advised students to go to as many hackathons as possible.

"I don't know when the last hackathon here was," he said (the university's annual MedHacks hackathon was in September, and twice-yearly HopHacks was most recently held in February), "but hopefully you all went to it. To see these events bring thousands of students, in some cases, from all over a region to come together on a weekend, on their own time, to just build things and make new friendships with people who like building things, is amazing."

As for his internationally renowned wife, professional tennis player and four-time Olympic gold medalist Serena Williams, he said he often asks her for advice on mastering a field.

"I'm lucky now because I get to see firsthand someone who is one-of-a-kind at her craft," he said. "One of the things she's incredibly good at is understanding what she's good at and what she isn't, and then delegating the stuff she isn't, in some cases—you can't delegate winning grand slams—and then drilling down and forcing herself to train for the things where there's any weakness or slip-up. Those are the things she's optimizing for, and she's doing so in her way."

He said he draws inspiration from his wife's excellence and the way she performs in her own distinctive style. He said it was similar to the agency millennial entrepreneurs have to create and improve on existing technology.

"I deeply believe that your generation is the first generation to think of themselves not just as receivers, but also as creators," he said. He again recalled his childhood, listening to music on a Walkman, which he comically tried to describe for his younger audience. "If I listened to a cassette tape of Metallica, I had a one-way relationship with that content. There was some authority providing the content, and I gave them money and I took it from them. You all are the first generation to start thinking of content as something that can be improved upon. And I'm thrilled because that's a powerful idea." 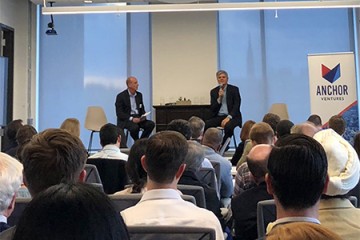 Steve Case: 'Create the next Amazon'