For the first time this anthropology conference, titled Displacements, is taking place entirely online, an experiment that aims to be both environmentally conscious and economically feasible to a wider range of scholars and researchers.

A white paper/practical guide about carbon-neutral conferencing prepared by the Environmental Humanities Initiative at UC Santa Barbara estimated that a virtual conference creates about 1 percent of the carbon emissions of conventional conferences, which often attract attendees from around the world to a host location.

Johns Hopkins University will host the Displacements conference website and provide essential technical and logistical support. The event is co-sponsored by the Alexander Grass Humanities Institute, the Department of Anthropology, and the Johns Hopkins Vice Dean's Fund.

The Hub caught up with Pandian to talk about having virtual discussions, reaching out to emerging scholars, and how to handle sensitive research in an era when information wants to be free.

In your interview with Allegra Lab you mention three impulses that led to this virtual conference experiment: the immense carbon footprint of academic conference travel, the prohibitive costs and/or travel restrictions that might prevent access to an academic conference, and liberating a discipline as in-the-world as anthropology from the confines of a multi-purpose meeting room. Is the hope that it appeals to anthropology graduate students and junior faculty members who otherwise might not have the resources or time to attend a conference? And does that speak to an awareness of the administrative and teaching demands placed on emerging scholars? 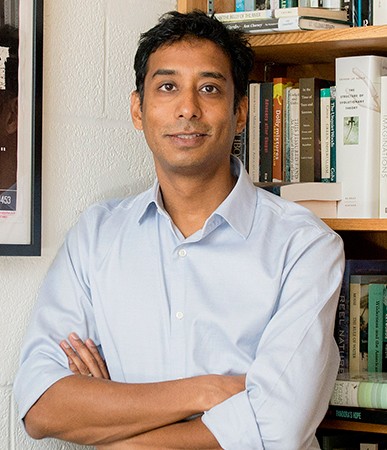 Absolutely. It's a serious commitment of time and money to make your way to some distant place for a few days to attend a conference, paying often-steep registration fees and hotel room rates, making arrangements to juggle and cover whatever demands one might have at work and at home, all for the chance to get feedback on new work and to possibly impress senior colleagues or prospective employers, something that remains very much a chance in the frenetic and bustling environment of a major conference. Most of us have had the experience of working like mad to write some paper only to find that we are reading it aloud to a big room of mostly empty chairs. Many graduate students and junior scholars have been writing on Twitter about #displace18 with precisely these concerns in mind. Under circumstances of heightened academic precarity, most especially in the humanities and social sciences, there is a need for alternative means of sharing fresh research.

Are you and organizers also hoping that you might be able to attract scholars and researchers outside the field to check out both a virtual conference and an anthropology conference? I ask because, especially in America, anthropology is in some ways the original interdisciplinary field. And so much anthropology work right now is informed by—and has important contributions to make to—contemporary issues and trends in urban policy, public health, sociology, political science, economics, and regional studies around the globe.

We've been really surprised and gratified by the extent to which researchers and thinkers in a range of fields—geographers, sociologists, filmmakers, artists, community activists, and others—have expressed an interest in this anthropological venture. We've also been very happy to see that our low registration rate of $10 has opened up the conference to people with some curiosity about anthropology who seem excited about the chance to check it out. In fact, even my dad and my father-in-law have registered.

"Cultural Anthropologists Are Helping to Build the Low-Carbon Path"

People have been tweeting about the conference in many languages I can't read—Swedish, Turkish, and Mongolian, for example—in the past couple of days. Our registrants and participants come from dozens of countries around the world, quite unusual for what has long been a small and decidedly regional conference.

Could you talk a bit about how this online format, with its range of immersive multimedia options, accommodates the kinds of work and research anthropologists are doing today? The field is a long way from the days when an ethnographer with a notebook would turn field notes into a monograph.

Even that ethnographer with a notebook in bygone days would ultimately seek to conjure an immersive experience of some other place. Our conference on "displacements" tackles the subject as a serious challenge in the contemporary world—as evinced by refugee crises, political upheaval, environmental problems, and so on—but also displacement as a matter of method, as a mode of research, displacement into some other way of being and feeling as the essence of anthropological engagement.

In this sense, what visual anthropologists and filmmakers do with the sensory qualities of media like film and video might be understood as an intensification of what is already at stake in anthropology, rather than a fundamental departure. We have been lucky to find partners in this endeavor in the Society for Visual Anthropology, who have lent their expertise with visual media and also curated a wonderful festival of 17 recent ethnographic films that are an essential part of the conference.

We have also been working to equip presenters with the tools needed to produce effective multimedia presentations. When we opened conference registration, we made available a "Participant Toolkit" with technical advice on how best to make use of this medium. I'm very glad we did this; the vast majority of conference presentations are rich in photographic images, moving images, and sound, with very little by way of talking heads.

As researchers, anthropologists sometimes work with populations whose way of life or everyday existence is at odds with or stigmatized by political regimes or governing institutions of their home countries and cities, and the very "displacements" theme of this conference addresses ways in which various forms of power impacts the environment, people, and ideas. How is Displacements navigating the balance of sharing scholarship that comes with a conference and, well, protecting people who may need protecting?

This is a really important question. In one way, you can understand this conference as an outgrowth of the open-access philosophy of the Society for Cultural Anthropology and other such scholarly societies; our journal, Cultural Anthropology, was one of the first major anthropology journals to become an open-access publication in 2014, and though this conference does charge a nominal registration fee, the idea is to make access to anthropological knowledge a much less daunting commitment.

On the other hand, though, as you rightly suggest, the question of access has other sides, most especially when it comes to work with sensitive subjects and vulnerable populations. What steps can be taken to ensure that the online medium gets neither our presenters nor their subjects into unwanted troubles and exposures? We had to think very carefully about how the conference website and its embedded video presentations would be password protected and secured, as much as possible, from access and duplication beyond the space of the conference itself. It's been a real challenge, figuring out this balance.

It sounds like the Displacements conference portal will function like a combination broadcast and on-demand network during the conference. Programming will be ongoing, and previously "aired" presentations or panels can be selected from a menu. You're using the hashtag #displace18 to track social media discussion and engagement. A conventional conference typically evaluates itself through its attendance and, ergo, revenue generated. For any experiment like this, evaluation can be elusive. How are you and the organizers assessing the conference after its over?

We're anthropologists, and so we think and work with experience. One question on our minds in planning the conference had to do with the "liveness" of seeing and hearing something in person, and in the company of others, that sense of a collective event of thought. We thought a lot about what it would take to conjure at least a semblance of this liveness on an online platform. There are several strategies we have devised with this desire in mind, the desire to broach at the least an "imagined community," to borrow that idea from Benedict Anderson, of people in far-flung places who are nonetheless sharing the same experience with at least some sense of simultaneity.

The live-stream was a key development meant to allow for the simultaneous experience of what is being streamed (even if pre-recorded) through the site at a given moment. Chat boxes and social media feeds are other strategies. We have also encouraged people to form local "nodes" to participate collectively in the conference, and I'm happy to say that there are literally dozens of these that have formed around the world. What will participants make of all this? On our hard-working roster of conference planners, we have a user experience designer who is focused specifically on this question, and a conference page that is designed to elicit such feedback in various forms—written, photographed, even drawn.

Do you hope Displacements could prove to be a model, not just for reducing the carbon footprint of an academic conference but as a way of exposing interested researchers to new scholarship and new kinds of scholarship?

That would be wonderful indeed. But first we have to make sure that this medium actually works. Please wish us luck and do tune in. 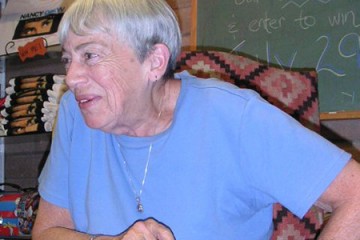 Published Jan 26, 2018
In tribute to author Ursula K. Le Guin, who died this week, Anand Pandian finds parallels between her work and his / Anthrodendum 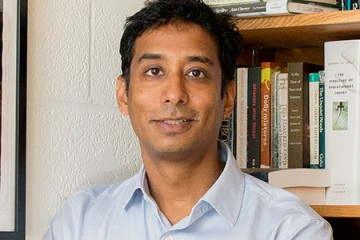 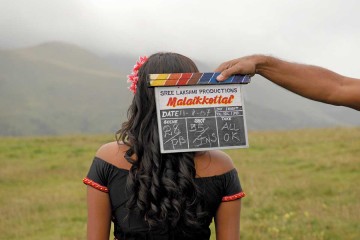