From the first moment Johns Hopkins University undergrads Sophia Porter and Courtney Schmitt learned about outer space, they were captivated. Driven by questions about what lay beyond, they have chosen academic trajectories that will skyrocket them into the aerospace industry.

Porter and Schmitt are among 41 young women selected as 2018 Brooke Owens Fellows. The fellowship offers them the opportunity to complete a paid summer internship at one of a wide range of leading space or aviation companies across the country. They will also be mentored by successful men and women from the aerospace world and have the opportunity to make connections that will help shape their future careers. 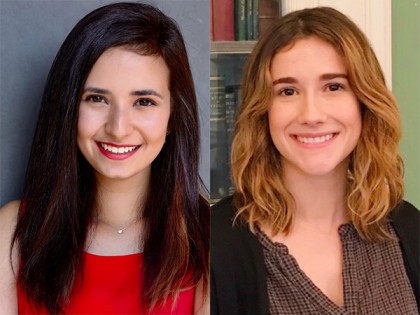 Porter and Schmitt grew up loving science, they both said, and their passion to answer the big questions has driven them in their pursuit.

"I remember going to Hayden Planetarium at the Museum of Natural History [in New York] as a kid, and watching Star Trek and Fringe," said Schmitt, a senior majoring in mechanical engineering. These shows made her wonder: "What is out there?"

While at Hopkins, Schmitt has worked on several research projects—from mapping black holes with a cosmologist to working at a startup building autonomous underwater vehicles. She said these "building blocks" have created a firm foundation for her career.

For Porter, a junior double-majoring in physics and applied mathematics and statistics, astrophotography led her to an interest in space exploration.

"What really did it for me was a book that I purchased from a secondhand bookstore—a two-foot picture book called Cosmos: A field guide," Porter said.

Fascinated by full-sized Hubble images of the cosmos, Porter wondered what objects were "out there." Finding that astrophysics had the answers to her questions, she came to Hopkins. She has since interned with NASA and SpaceX, and she even worked with the creator of those Hubble images she was so intrigued by.

Both students will intern in the private space sector, Porter at Blue Origin and Schmitt at Virgin Galactic.

"My ideal job would involve designing structural components of rockets as well as exploring new ways in which robotics can impact space exploration and transportation," said Schmitt, who is already working toward a graduate degree in robotics at Hopkins that she expects to finish up next year. She said she wants to "break down the barriers to spaceflight" and make it accessible.

Porter is keen to start work immediately after graduation and wants to explore the administrative side of the industry.

The Brooke Owens Fellowship aims to boost the careers of young women who "aspire to explore our sky and stars, to shake up the aerospace industry, and to help their fellow men and women here on planet Earth." The award, created in 2017, is named in honor of Dawn Brooke Owens, a space industry pioneer and accomplished pilot who died in 2016 of cancer at 36. 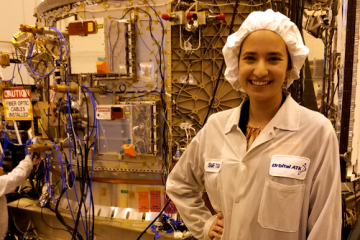 Out of this world

Published Aug 7, 2017
As an intern at NASA, Sophia Porter learns that achievements are worldwide triumphs and every contribution matters