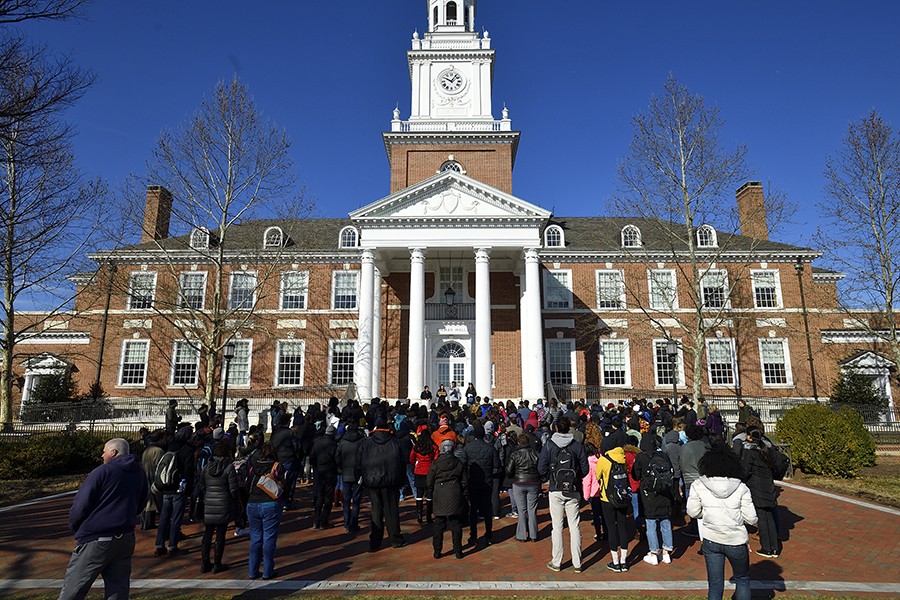 Image caption: About 200 students participated in a walkout Wednesday morning as part of a nationwide protest against gun violence.

About 200 Johns Hopkins University students walked out of class at 10 a.m. today as part of a nationwide protest against gun violence, an event timed to coincide with the one-month anniversary of a mass shooting at Marjory Stoneman Douglas High School in Parkland, Florida.

"We are rising in solidarity with the Parkland survivors and students across the country to demand an end to gun violence."
Anthony Boutros
Johns Hopkins sophomore

Participants gathered in front of Gilman Hall on JHU's Homewood campus and observed 17 minutes of silence—from 10 a.m. to 10:17 a.m.—a symbolic tribute to the 17 people who lost their lives in the Parkland shooting. The group later moved to The Beach, where they lined a section of North Charles Street and shouted "No more guns!"

The walkout was organized by a small group of Hopkins undergraduates. Organizers encouraged participating students to speak with faculty members prior to class to let them know that they planned to walk out.

Similar walkouts took place at thousands of high schools and colleges across the country Wednesday.

‘Students have just had enough:’ Walkouts begin across the nation one month after Florida shooting

"We are rising in solidarity with the Parkland survivors and students across the country to demand an end to gun violence, to demand that these atrocities never happen again," sophomore Anthony Boutros, one of the JHU event's organizers, wrote in an email to the Hub. "We are also demonstrating to show elected officials that we will hold them accountable for their positions and votes on gun control legislation, and that we will be voting in November."

"The Parkland tragedy hit particularly close to home for me," she said. "I was inspired by the walkouts that my own siblings in South Florida participated in. That is what encouraged me to help as much as I could with organizing a JHU walkout as a response to our nation's attitude toward weapons."

Boutros and Paulet are both members of JHU's Student Government Association—Boutros is the president of the sophomore class, and Paulet is a freshman class senator. On Tuesday night, the SGA passed a resolution affirming "its full and unwavering solidarity to the victims, survivors, and families of the Parkland School Shooting" and resolving "to do anything in its power and capacity to aid the cause of resolving gun violence in the United States."

The resolution calls on the university to support the cause of reducing gun violence and implores Congress to take swift action on gun reform measures, including banning the sale of assault weapons, strengthening and expanding background checks, raising the minimum age required to purchase a firearm to 21, and blocking the sale of guns to individuals with a history of mental illness.