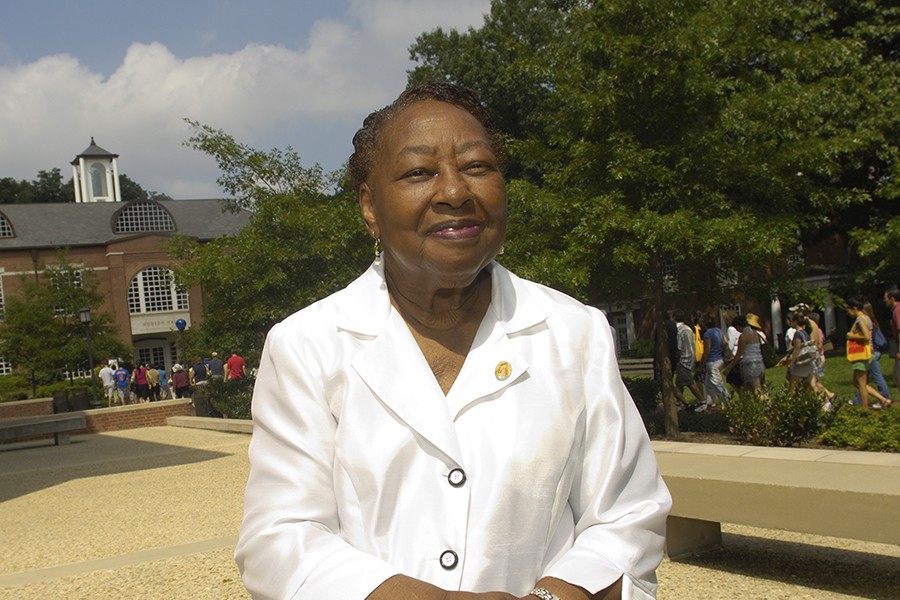 Minnie Hargrow, who retired in 2007 after more than 60 years at Johns Hopkins University, died Friday. She was 96.

"Miss Minnie was the heart and soul of Hopkins," says former university President William Brody, using the affectionate nickname Hargrow earned over her years of service. "She embodied the spirit of the school—she knew everybody, and everybody knew her. For me, she was an informal adviser and a great friend. She had seen Hopkins through the years, and she was one of the people who made Hopkins such a special place."

Born on a farm in North Carolina on Dec. 18, 1921, Hargrow came north to Baltimore in the mid-1940s after her husband returned from serving in World War II. She joined Johns Hopkins as a Levering Hall cafeteria worker on Oct. 1, 1946—when the school was all-male and only eight main buildings stood on the university's Homewood campus.

Hargrow worked in Levering for 34 years, spending 25 of those years as head supervisor. It's there that she developed a reputation for her acts of kindness and attention to detail.

"I met Miss Minnie when I was an undergraduate in 1949," says Ross Jones, vice president and secretary emeritus of Johns Hopkins. "She worked in Levering Hall Cafeteria and got to know that I loved French Apple Pie. Almost every time I passed through Levering she would tell me, 'I've saved some apple pie for you.' Later we saw each other almost daily when she worked in Garland Hall as a beloved general factotum for four Hopkins presidents. The university family has lost a lovely, unique person."

In 1981, a hiring manager in the president's office asked her if she knew anyone in dining services who could replace the retiring assistant to the president.

"Yeah—me," she answered. She was hired within two hours.

The Gazette reported at the time of her retirement that although she was based in the president's office, she was known across the university.

"It's like a family here," she told the Gazette. "I enjoy everybody. It's always been a pleasure to come into the office every morning."

For Hargrow, working in the president's office was also a literal family affair: her daughter, Brenda Brockman, worked alongside her as a receptionist before retiring in 2009.

"Miss Minnie had a smile that lit up all of the Homewood campus," says Julie Morgan, a retired associate secretary for the board of trustees. "When she was out several months with a serious illness, it was like the sun had gone out of our lives. She was particularly an icon for the African-American community at Hopkins, many of whom called her 'Mother Minnie.'"

Outside of her work at Hopkins, Hargrow was a devoted volunteer. She received a citation at the 1993 Martin Luther King Jr. Commemoration for her dedication to the Homewood campus, and she was a regular volunteer at the United Way, Meals on Wheels, and at a local nursing home.

In a 1995 Gazette profile on Hargrow and her longtime colleague, Mamie Brown, Hargrow explained how she and Brown stayed active and motivated.

"We're not quitting until God stops us," Hargrow said. "Both of us are doing something all the time. That's why we don't get tired."

A lover of travel, Hargrow also worked from home part time as a travel agent and enjoyed taking cruises around the world, including to Rome, London, and Jerusalem.

"While we mourn her passing, there is also much joy in knowing that hers was a life well lived," says Morgan.

A viewing will be held from 9 a.m. until 7 p.m. on Friday, Jan. 26, at the March Life Tribute Center located at 5616 Old Court Road, Randallstown, Maryland. The family will receive guests from 5 to 7 p.m. A funeral service will be held at 10 a.m., Saturday, Jan. 27, at the Cornerstone Church of Christ in Baltimore. Hargrow will be interred at the Maryland National Memorial Park in Laurel, Maryland.