Ready to launch: Design competition challenges students to build a device that launches a foam football 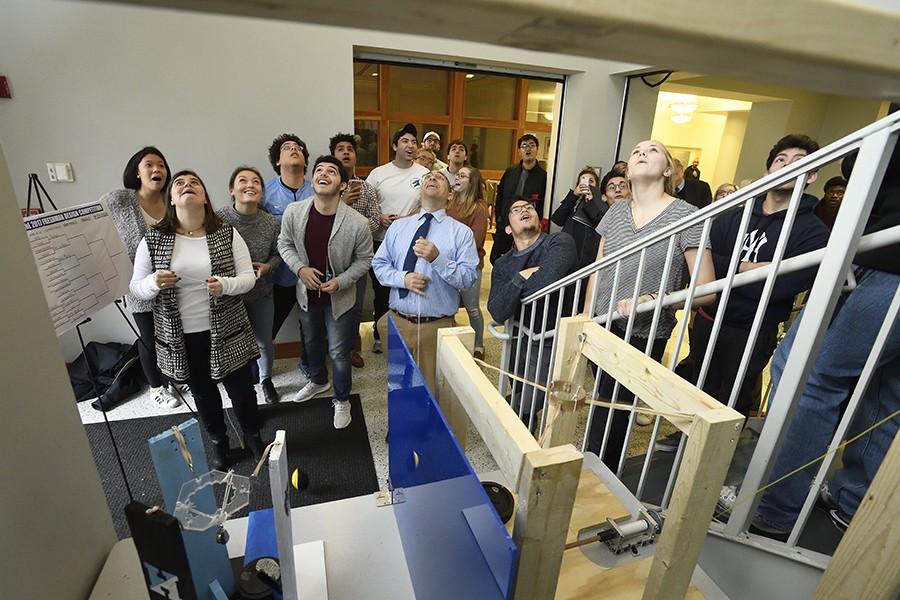 Image caption: Students crowded into the north stairwell in Hodson Hall to watch teams launch a foam football as high into the air as possible

For many students, the end of a semester means a long exam or an even longer term paper. For Johns Hopkins first–year mechanical engineering students in the Intro to MechE Design & CAD course, it means launching a foam football as high into the air as possible.

But the final assignment isn't as simple as it sounds. Based on what they learned throughout the course, students spent three months designing, prototyping, and testing their launching devices. On Wednesday afternoon, 18 teams put these devices to the test in a single-elimination tournament in Hodson Hall.

Students, faculty, and guests crowded the staircases on multiple levels that overlooked the launch site at the bottom of the north stairwell. Teams had two minutes to set up and connect their devices to the energy input system—a five-pound weight and pulley system that, when released, provided a fixed amount of rotational energy to each device.

"The team that can best capture the spinning energy and launch the football the highest will win the competition. The devices are all different—some students opted to use levers, others used springs, etc.," explained David Samson, a teaching assistant for the class. "The ultimate goal is to hit the ceiling on the 3rd floor."

None of the footballs hit the ceiling of Hodson Hall, but some got serious air, much to the excitement of the crowd. And even when devices failed to launch, students were quick to congratulate each other on their hard work and offer suggestions for improvements.

After an intense competition, Team Full Metal Jacket finally emerged as the winner. Other devices were more complex—and some were decorated with Christmas wrapping paper or Hopkins logos—but Full Metal Jacket created a simple wooden device that got the job done. 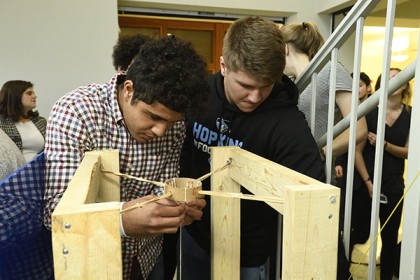 "Our design was consistent. We tested mostly for consistency. And it was one of the simpler ideas. We just tried to optimize the simplest thing we could think of and work from there," said Franz O'Meally, who won this year's competition along with teammates Marcus Haughton and Jonah Lyons.

According to Steven Marra—associate teaching professor, instructor for the course, and mastermind behind each year's challenge—this year's task was more flexible than in years past, allowing students to be more creative in terms of design and materials used. Nonetheless, students were still required to apply engineering fundamentals, such as the conservation of energy and Newton's laws, to be successful in their designs.

"This was probably the most challenging competition I have assigned so far," Marra said. "The students worked through the engineering design process all semester and created some excellent devices. It's always exciting to see how creative our students are at solving problems." 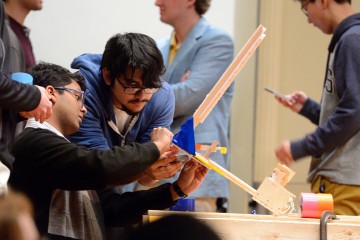 Battle of the rubber bands