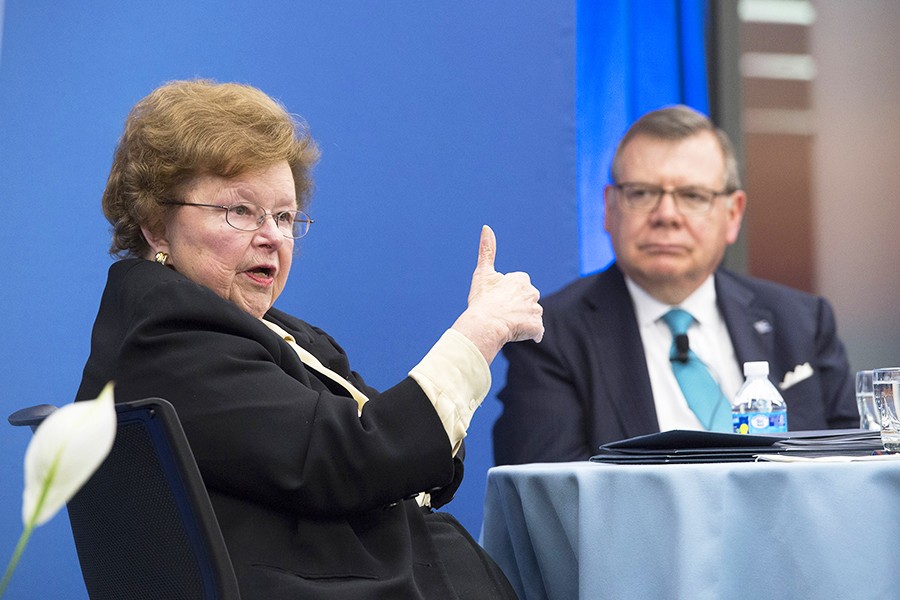 Barbara Mikulski, who represented Maryland in the U.S. Senate for 30 years, spoke at the Johns Hopkins Carey Business School on Nov. 13, addressing a host of topics ranging from women's leadership to the economy in a lively one-on-one discussion with Carey Dean Bernard T. Ferrari.

Mikulski, now a Homewood Professor of Public Policy at Johns Hopkins University, sat for a fireside-style Q&A at Carey's Harbor East campus. In her trademark matter-of-fact and animated style, Mikulski spoke on a wide range of issues, weaving in anecdotes and insights from her political career.

The topics included the barriers to entry for women in leadership, the interplay between business and government, and her view of the threats facing the U.S. economy.

When asked to critique the strengths and opportunities of business that future leaders should examine, Mikulski said business was good at creating and adapting technological change but slow on the uptake for social progress.

"For business to really succeed, it has to look at the new democracy—that more women are coming to work, the fact that we have a very diverse society and are moving toward a majority black and brown country. … The welcoming of LGBT people—it's a changing democracy," she said. "I think business has to look at it and be a force for society. Society is open, so should opportunity be."

Later on this topic, Mikulski said the strongest push should come from within an organization—not from the government—and that the tone for corporate culture is set at the top.

"Culture trumps rules, regulations, and so on. How does [your business] create a positive culture that is welcoming, inclusive, and that looks at talent?" she said. "That is going to be driven by the board of directors and shareholders."

Mikulski said one of the keys to addressing the dearth of women in leadership roles in both the public and private sectors is identifying and developing talent. As she recounted her rise from a community organizer to the Baltimore City Council to the Senate, Mikulski touted the importance of resilience.

"We heard 'no' so often in our life, but we took every 'no' and turned it into a 'yes'," Mikulski said, recounting the challenges she and others faced.

Mikulski visited Carey as part of the school's Leaders+Legends speaker series. Her visit is also part of a series of events focusing on women's leadership.