Two-term Ohio Gov. John Kasich, a Republican who ran for president in 2016, attracted a large, bipartisan crowd made up mostly of students for a talk at Johns Hopkins University on Monday night as part of the Milton S. Eisenhower Symposium.

Kasich mentioned President Donald Trump by name just once, but he was up-front and firm about his politics and values, stating that he is pro-life, supports the death penalty, and defines himself as a conservative. He also focused broadly on mental health, kindness, and faith in a divine Creator. It wasn't a typical political stump speech. 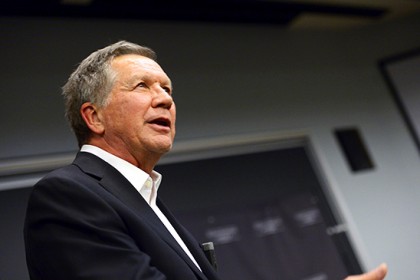 "We wanted to bring a Republican to challenge our mostly liberal campus, but who would do so in an intellectual way," said Charles Crepy D'Orleans, one of the symposium's programming chairs.

Kasich spoke for half an hour before answering student questions. Some students praised him, others challenged him—and one even asked him for a job.

Mickey Sloat, a freshman molecular and cellular biology major, said she was glad the audience seemed receptive to the governor's message.

"I think it was a great thing for people on campus to hear someone who has a different point of view than they do," she said. "The students seemed welcoming and listened. It was a really great thing to see."

The Hub spoke with several students following the talk to find out what messages were the most powerful to them.

"There is strength in weakness. ... Everyone has a purpose"

Kasich opened his talk urging students to seek help if they feel overwhelmed by the pressure to succeed—particularly at a demanding school like Hopkins.

"This is an elite institution," he said. "If any of you start to struggle with yourself, you have to call somebody. … Everybody has weaknesses. It's really a matter of how you deal with the things that haunt you [that matters]."

It's the same advice that he says he gives to his 17-year-old daughters, who will be starting their own college careers soon.

"I liked that he started off with a message of self care," said Sanjana Rao, a first-year studying computer science who said she was energized by the talk. "As a freshman coming in, it's really important for me to hear that. I have been stressing myself out because Hopkins is a tough place, and I just had a little moment where I felt like I can do this, somebody believes in me, and I appreciated that he spoke about that."

Added Sunag Udupa, a first-year chemical and biomolecular engineering student: "I was really surprised he started out his presentation talking about things that transcend politics rather than specific political issues. It's not the typical way a politician talks about things, because usually they're usually looking for a base."

It was a message that resonated with Marisa Brand, a senior graduating in December with a degree in politics and marketing.

"I think it's great that he's taken the platform that he built during the 2016 election and done something with it," she said. "While he's obviously focused on the well-being of Ohio, he's also taken that platform to spread a greater message of unity and bipartisanship—of working across the aisle. … I think Kasich's platform is really helping shape a better conversation, which will also lead to better legislation."

Millennials are the constituents of the future.

"For the first time in our history, Generation X and millennials will equal the number of Baby Boomers in an election," Kasich said, looking ahead to 2020. "I think there is an excitement and a newness connected to your generation. … But the parties are going to have to get their acts together, because you're up for grabs."

"I think there is an excitement and a newness connected to your generation. … But the parties are going to have to get their acts together, because you're up for grabs."
John Kasich
Ohio governor

Kasich's message served as a reminder to the student body that not all millennials—and not all Hopkins students—are Democrats.

"He wanted to engage us, the younger generation of voters, and I agree with him when he says that one of the biggest issues today is partisan politics and that we should look at the whole politician and platform rather than vote on a single issue straight down the ticket," said Eddie Taufer, a freshman economics major who says he would have voted for Kasich if he had been old enough to vote in last year's election.

"I knew that I wanted to come to this talk as soon as I saw the posters," added Rao, who says she identifies as an Independent. "Yes, I disagree with him on certain issues, but I like that he's trying to bridge the divide between the parties. That's really appealing to me."

He says he won't run for president again (but not everyone believes him).

Several students speculated that Kasich would run for president again, though they declined to say why they thought so. Marisa Brand said she wasn't sure if he would, but that she would gladly work on his campaign if he did enter the 2020 race.

Other students viewed his talk and the subsequent question and answer session as laying the groundwork for a future presidential campaign.

"I feel like he deflected a lot of the hard questions, especially [one about a state abortion policy] and one about the NRA and gun control," said Irfan Jamil, a first-year applied math and economics major.

"I noticed he was being very careful about what he said, and when he started talking about how millennials were up for grabs, I sensed he was promoting himself," he said. "It was kind of a hint that he would run again—I felt like he had an agenda." 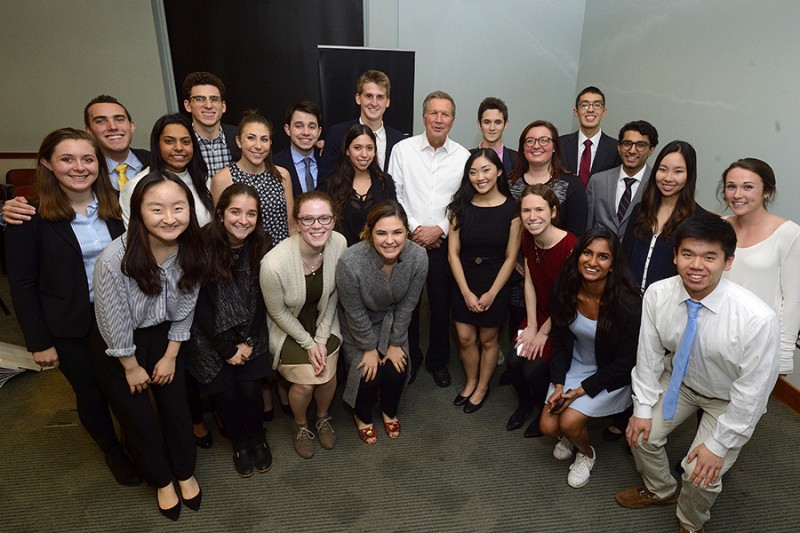 Image caption: Members of the MSE Symposium got an exclusive pep talk with the governor following his talk