He receives appointments in Krieger School's departments of English, Classics 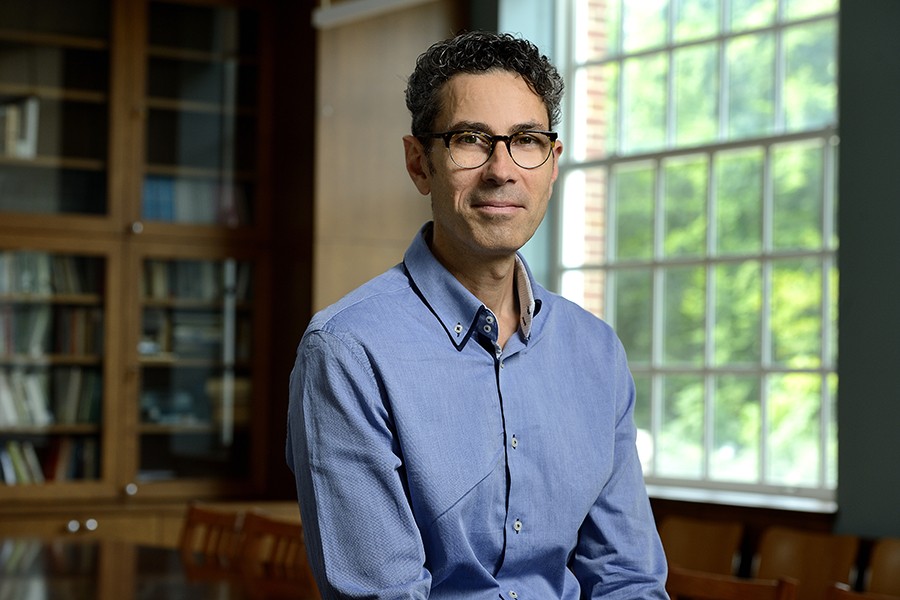 In the world of medieval literature and linguistics, Chris Cannon is a self-described "anti-foundationalist." He digs down into bedrock understandings within these scholarly areas, and then challenges them.

"One reviewer characterized my work as 'reading obscure texts carefully to reveal things about them that we never noticed before,' and doing that is probably what makes me feel the happiest when I work," he says.

He also likens that work to archaeology, noting that the metaphor for his research as "digging" arose at first because the stacks at Harvard—where he received his undergraduate, graduate, and doctoral degrees—are literally subterranean.

This fall, Cannon—a scholar of linguistics and literacy and one of the world's leading experts on 14th-century poet Geoffrey Chaucer—joined Johns Hopkins University as the 31st Bloomberg Distinguished Professor. He has two appointments in the Krieger School of Arts and Sciences: the Department of English and the Department of Classics.

Cannon comes to Hopkins from NYU, where he chaired the Department of English for five years.

"Dr. Cannon is a rare and unique scholar whose appointment allows these two Krieger School departments to develop a complete run of historical scholarship—from ancient to Renaissance Latin in Classics, and from medieval to contemporary British literature in English," says Beverly Wendland, dean of the Krieger School. "At every turn in his career, he has worked across methods and disciplines to overturn long-held assumptions about literary history and the role of language and literacy."

Bloomberg Distinguished Professors are an interdisciplinary group of scholars who are working to address major world problems and teach the next generation. The program is backed by a $350 million gift from Johns Hopkins alumnus, philanthropist, and three-term New York City Mayor Michael R. Bloomberg.

"It is very exciting to welcome Dr. Cannon to the Johns Hopkins faculty as a Bloomberg Distinguished Professor," says Sunil Kumar, provost and senior vice president for academic affairs at Johns Hopkins. "A renowned scholar of medieval literature, he has made significant interdisciplinary contributions and influenced how literary history is taught to the next generation. In the spirit of the BDP program, Dr. Cannon has served as a convener of humanists from several fields while at NYU, and we look forward to him leading new initiatives that bring the Johns Hopkins community together."

Cannon is the author of four books, including, most recently, From Literacy to Literature: England, 1300-1400 (Oxford University Press, 2016). He is currently co-editing with Harvard's James Simpson a revision of the 19th-century edition of all of Chaucer's works by W.W. Skeat. He is also currently working on a fifth monograph that explores how literacy and oral traditions intersect, and particularly the role that dictation played in writing and the circulation of books during the Middle Ages.

Literacy and education during the Middle Ages is an area of particular interest for Cannon, and especially the history of childhood reading in medieval England. In addition to teaching undergraduate courses, he is expected to contribute a humanistic element to the Johns Hopkins Science of Learning Institute, an interdisciplinary effort that strives to better understand learning.

He also hopes to organize a conference on the representation of sound in writing. During the Middle Ages, Cannon says, Latin was the universal language, and students had to teach themselves how to write in their spoken languages after having mastered Latin in primary school. He says he's curious about the way learning to read and write in what was, in effect, a foreign language affected the way writers "viewed their mother tongue, and put it to literary use."

For Cannon, the path to examining medieval language and literature began in an elective history of English course while he was an undergraduate. Though he had begun his academic career as a music student, he says he was always attracted to the theoretical side of the arts.

"I was always going to end up somewhere in a library, with books, digging around in the stacks," he says.

Cannon says he will encourage his students at Johns Hopkins to, as he does, notice things about literature that they have never noticed before.

"I think of it as looking for a trailing thread," he says. "Find the thread that doesn't fit—and pull it."