Adverse childhood experiences, or ACEs, are broadly defined as experiences of abuse, exposure to violence, or family dysfunction. These experiences can include parental divorce, domestic violence, economic hardship, and discrimination. The researchers say ACEs can contribute to lifelong negative effects on health and health care disparities, and previous studies have linked poor child and adult health outcomes to poverty and ACEs.

The findings, published in the October issue of the journal Pediatrics, offer new insight into the potentially higher childhood resilience among children from immigrant families supported by strong community networks and a sense of cultural identity, says Lisa DeCamp, an assistant professor of pediatrics at the School of Medicine and the study's senior author.

For the study, a child from an immigrant family was defined as a foreign-born child, or a U.S.-born child with at least one foreign-born parent. Using data from 2011 to 2012 gathered for the U.S. National Survey of Children's Health, the study included a total of 12,612 parent-identified Hispanic children, 66 percent of whom were from immigrant families. Parents answered a questionnaire that listed nine ACEs, indicating whether their child had been exposed to each. (The researchers note that these kinds of parental surveys may not adequately reflect the breadth of traumas children may be exposed to.)

The researchers found that although more children in immigrant families experienced poverty compared to children in U.S.-native families (80 versus 47 percent), fewer reported high exposure to ACEs (16 percent versus 30 percent). Additionally, immigrant families reported a higher prevalence of no ACE exposure than did U.S.-native families (53 versus 44 percent). The researchers found that immigrant children experienced less exposure to parental divorce (11.9 percent versus 44 percent).

After accounting for different variables such as children's age, parental education levels, household income, and family structure, the differences remained.

"This points to two possible explanations: There are protective measures we don't see, such as resilience, or we're not asking the right questions that address adverse experiences specific to immigrant children such as fear of deportation of separation," says Tania Caballero, a pediatrics research and clinical fellow at the Johns Hopkins University School of Medicine and the paper's first author. Both DeCamp and Caballero are part of the Johns Hopkins Children's Center.

Because Hispanic children currently account for a quarter of all children in the United States, and Hispanics are projected to be the largest ethnic group in the U.S. in 25 to 30 years, DeCamp says it's crucial to think ahead to identify likely traumas and protective factors specific to them.

"Children coming from immigrant families often come from difficult circumstances, and these are children we hope will succeed," DeCamp says. 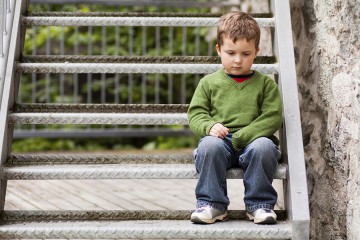 Study: Nearly half of U.S. kids exposed to trauma

Published Winter 2013
Donna Jackson Nakazawa was ill for years until a doctor asked her a question no other doctor had ever asked. / Johns Hopkins Magazine