Study: Nearly half of U.S. kids exposed to traumatic social or family experiences

Nearly half of all children in the United States are exposed to at least one social or family experience that can lead to traumatic stress and impact their healthy development—be it having their parents divorce, having a parent die or living with someone who abuses alcohol or drugs—increasing the risk of negative long-term health consequences or of falling behind in school, suggests new research led by the Johns Hopkins Bloomberg School of Public Health.

The study reports on new data showing the magnitude of these adverse experiences in the child population in the United States, while also suggesting that training parents, providers and communities to help children with trauma cope and build even basic aspects of resilience may soften the blows and lead to later success, despite the obstacles.

The findings are published in the December issue of the journal Health Affairs.

"This study tells us that adverse childhood experiences are common among U.S. children and, as demonstrated in adult studies, have lifelong impacts that begin early in life," says study leader Christina D. Bethell, a professor in the Department of Population, Family and Reproductive Health at the School of Public Health. 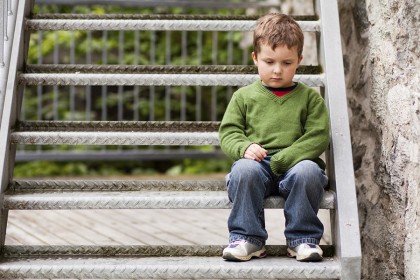 Also see: Advocates aim to save Baltimore children from impact of violence (The Baltimore Sun)

For the study, Bethell and her colleagues analyzed data from the 2011-12 National Survey of Children's Health, a survey of parents of 95,677 children under 17 from throughout the United States. The survey included questions about nine adverse childhood experiences as reported by parents: extreme economic hardship, parental divorce/separation, lived with someone with a drug or alcohol problem, witness or victim of neighborhood violence, lived with someone who was mentally ill or suicidal, witnessed domestic violence, parent served time in jail, treated or judged unfairly due to race/ethnicity and the death of a parent. The survey includes myriad data on family and neighborhood environments and parental well-being in addition to children's schooling and medical care, and contains some data about child resilience.

The study found that more than 22 percent of children represented in the survey had two or more of these traumatic childhood experiences. Broken down by state, Utah had the lowest number of children experiencing two or more traumatic experiences (16.3 percent) while Oklahoma had the highest (32.8 percent).

Researchers found that children with two or more adverse experiences were more than 2.5-times more likely to repeat a grade in school as well as be disengaged in school, compared to those without any traumatic experiences, and after adjusting for confounding factors such as race, income and health status. Children with these experiences were also much more likely to have a wide range of chronic health problems, including asthma, ADHD, Autism Spectrum Disorders, obesity, and other health and risk factors. Children with adverse childhood experiences were also less likely than those without to live in a protective home environment and have mothers who were healthy.

The news isn't all bad: Among children with two or more adverse experiences who already have a chronic condition requiring regular doctor visits, those who had learned and showed even the one aspect of resilience evaluated in the study were 1.5-times more likely to be engaged in school and nearly half as likely to repeat a grade in school compared to those who had not learned this skill.

Also a positive: Children and families who received quality health care from a doctor who knows, listens to, and ensures children's whole health care needs are met and coordinated did better than those who did not.

Bethell says that parents and children can be taught to recognize and reduce the biologic, emotional, and psychological impact of traumatic stress, bounce back when faced with a challenge, and to develop a habit of hope instead of despair. Some of the most promising methods involve simple breathing techniques as well as so-called "trauma-informed" care and community approaches growing in popularity all across the country.

"Adverse childhood events don't automatically have to have long-term traumatic impacts for children," Bethell says. "To recognize trauma in children requires widespread awareness and skills-building among adults interacting with children at all levels. Efforts to support children, families and communities, so they can create a culture that supports safe, stable and nurturing relationships, hold great promise. Rapid innovation and studies documenting best methods and their impact are called for now. Supporting and teaching the adults in children's lives to learn to heal from trauma and learn resilience themselves may be the most effective strategy to implement immediately."