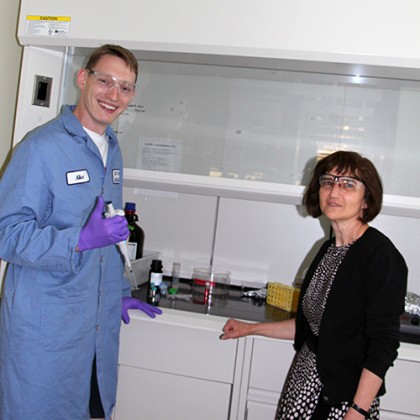 This finding, published in the Journal of Virology, could steer scientists toward a treatment targeting the protein, called a delta peptide, which could curb Ebola's ability to spread quickly from infected patients to family members and health care workers.

Ebola's ability to spread rapidly contributed to more than 28,000 cases and 11,000 deaths recorded during the 2013-14 Ebola outbreak that ravaged West Africa. More recently, a smaller outbreak in the Democratic Republic of Congo reminded health officials that learning how to contain Ebola must remain an urgent goal.

The delta peptide's likely role in spreading the disease was uncovered by researchers from Tulane University, Louisiana State University, and Johns Hopkins University's Institute for NanoBioTechnology, or INBT.

The team members were aware that Ebola, like all viruses, "hijacks" biochemical machinery inside healthy cells and forces it to produce copies of the virus. They also knew that Ebola causes this captive cellular machinery to produce many delta peptides—bits of protein whose purpose was uncertain.

"Ebola causes infected cells to make the delta peptide," said Kalina Hristova, a professor of materials science and engineering in Johns Hopkins' Whiting School Engineering and a co-author of the journal article. "However, delta peptides do not become part of the new viruses. Therefore, they must be helpful to the virus in some other way."

"The team knew that this delta peptide was produced by the Ebola virus, but they didn't know what its purpose was. I'm glad I had the right skill set to help find out what kind of damage it could do."
Alexander Komin
JHU graduate student

Such a microscopic invasion can cause severe gastrointestinal illness, which is commonly seen in people infected by Ebola. The accompanying loss of blood and digestive fluids exposes the patient's family caregivers and health workers to infection by the virus. The researchers said these cellular membrane attacks suggest the proteins are of a type known as viroporins.

The lead researchers at Tulane turned to Johns Hopkins biomaterials experts skilled in high-tech testing that tracks the impact of protein particles on materials that mimic cell membranes and barriers.

First, Gregory Wiedman, then a doctoral student at Johns Hopkins, gathered electrical signal data indicating that Ebola's delta peptides could interact with lipids in the membrane that surrounds human cells. Wiedman received his PhD from Johns Hopkins in 2015 and now works as a postdoctoral fellow at Rutgers University's Public Health Research Institute in New Jersey. He is a co-author of the Journal of Virology article.

"It's really an honor," he said, "to be able to contribute some knowledge that may help keep people from getting sick."

Later, another graduate student, Alexander Komin, conducted different experiments to confirm that the delta peptide could cause holes to form in a mammalian's cell's protective membrane.

"It's great to have been included in this project," said Komin, who also is a co-author. "The team knew that this delta peptide was produced by the Ebola virus, but they didn't know what its purpose was. I'm glad I had the right skill set to help find out what kind of damage it could do."

Identifying the biological troublemaker is an important first step toward thwarting the attacker.

"Maybe we can now produce antibodies that can neutralize those peptides and keep them from damaging cells in the Ebola patient's gastrointestinal cells, which is one way the disease spreads," Hristova said.

She said researchers at Tulane University Medical School plan to build on the findings and develop such antibodies or another therapy to help keep Ebola from spreading so easily.

While conducting their experiments at Johns Hopkins, Wiedman and Komin were supervised by Hristova and Peter Searson, a professor of materials science and engineering at Johns Hopkins. Searson, a co-author of the journal article, also was a co-founder and former director of the university's INBT.