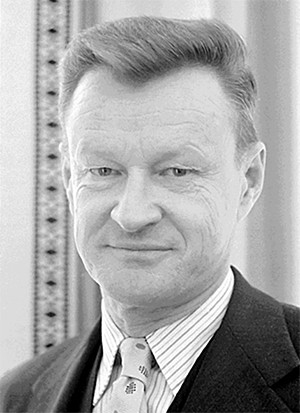 Brzezinski worked as a counselor to President Lyndon B. Johnson in the late 1960s, then returned to the White House under Carter, from 1977 to 1981, a period that included the Iran hostage crisis, the normalization of diplomatic relations with China, and the brokering of the Camp David Accords.

At Johns Hopkins, Brzezinski served as the Robert E. Osgood Professor of American Foreign Policy at the School of Advanced International Studies and as a senior fellow in the Foreign Policy Institute.

Zbigniew Brzezinski was a great intellectual and true statesman, &amp; a beloved teacher and colleague @SAISHopkins We mourn his passing

Brzezinski, who was born in Warsaw, Poland, in 1928, earned his bachelor's and master's degrees from McGill University in Montreal. He went on to earn a PhD from Harvard University in 1953 and served on its faculty from 1953 to 1960. In the early 1970s, he cofounded the Trilateral Commission along with David Rockefeller and served as its director from 1973 to 1976, before joining the Carter campaign and administration.

Upon leaving the White House, Brzezinski remained active in policy debates, serving on various committees and task forces during the Reagan administration, including the Chemical Warfare Commission, the National Security Council–Defense Department Commission on Integrated Long-Term Strategy, and the Foreign Intelligence Advisory Board.

Brzezinksi received the Presidential Medal of Freedom in 1981 and is the author of several books on global affairs—America and the World: Conversations on the Future of American Foreign Policy (2008); Second Chance: Three Presidents and the Crisis of American Superpower (2007); The Choice: Global Domination or Global Leadership (2004); The Geo-strategic Triad: Living With China, Europe and Russia (2001); The Grand Chessboard (1997); Out of Control (1993); The Grand Failure (1989); Game Plan (1986); and Power and Principle (1983).

He is survived by his wife Emilie; his children Ian, Mika, and Mark; and five grandchildren.