Daniels: 'I hope that you will embrace this world, in its vastness and its particularity'

Remarks as prepared for Johns Hopkins University President Ronald J. Daniels for the universitywide commencement ceremony on May 24, 2017.

Good afternoon. To our honorary degree recipients, alumni, and trustees … to our faculty and staff, including one of our newest faculty members, Senator Barbara Mikulski. It's great to see you, Senator … to our parents, family members and friends … and most especially to our graduates … welcome to the Johns Hopkins University Commencement for the great Class of 2017!

So, welcome to the Royal Farms Arena!

Some think we have commencement here—inside—in case of the inclement weather.

But no. We actually want to reassure you there is life after the FFC. You will still be able to get chicken tenders at all hours at Royal Farms.

Now, we know at Hopkins it can be disconcerting to think about what's next … A world without 24/7 access to UniMini mozzarella sticks ... A world where some junior will now be sleeping in your spot at Brody. A world in which Mrs. Gladys has retired after nearly five decades of keeping our students happy. Thank you, Mrs. Gladys.

Facing what's next is, of course, inevitable.

As this moment approached for each of you, I found myself thinking about my own first post-college adventure.

It was back in the Paleolithic era, the early 1980s, and I was a newly minted graduate of the University of Toronto with a degree in economics and political science. I had landed my first serious job as a research assistant for a blue ribbon governmental commission that was formed to address "Matters of Health and Safety Arising from the Use of Asbestos in Ontario."

Now, asbestos, as many of you know, is a mined material used for many decades as a fire retardant and as an insulant. But as had also been well known for decades, the mining and manufacturing of asbestos into a variety of products was enormously, enormously dangerous to the workers exposed to it—workers who did and who would suffer devastatingly high levels of disease and early death. It is one of nature's most potent carcinogens.

The commission was established in the wake of several high-profile and wrenching stories, including that of a Johns Manville manufacturing plant in a suburb of Toronto—Scarborough, Ontario—that at its peak employed more than 700 workers, almost 10% of whom had died from asbestos-related disease by 1984. And, indeed, many more have succumbed since.

In the searing assessment of the commission, the plant was, by any measure, "a world-class occupational health and safety disaster."

Now, this may not have been everyone's dream job. But it was mine.

It combined everything I was passionate about: the intersection of market economics and the public good; health and well-being of people; sound public policy-making; and the imperative of evidence-based decision making.

And of course, at the core of it were the data. Lots and lots and lots of data—and I had to mine those data to discern patterns, analyze impacts, and shape arguments.

It's possible that I would talk about those data with anyone who would listen—including the woman I had just started dating. In retrospect, I can see that exhaustive conversations about the effect of asbestos on individuals and markets may not have been the best first—or even second—date conversation.

But fortunately, she married me and I'm grateful she's still listening.

But back to the story.

My main assignment in this first job was to create a technical document that captured all the bits of data we had. For the hundreds of cases we were analyzing, I coded everything—the date the illness occurred, the duration and intensity of exposure. And in the end, we produced a comprehensive database that provided the foundation for a large-scale risk analysis that would, in turn, inform the commission's policy recommendations.

And this database was, in my humble opinion—and in geek world—a work of art.

Hopkins students, I know you get what I am saying when I refer to this.

But then art met life.

I vividly remember the moment it happened. I was staffing the commission at one of its public hearings. And the first witness that day was the widow of a worker at the Johns Manville Scarborough plant, whose husband had suffered a long and painful asbestos-related death.

Her name was Odette Dodds. She sat down at the table to begin her testimony. And next to her, she placed a small box. She told us that the box contained her husband's remains.

In an instant, all those intricate risk analyses, all that I had meticulously researched, coded, and artfully presented in database form narrowed to a single point.

The n of many became an n of one.

It was in that moment that I opened myself up to the truth that each data point I had coded was, in fact, someone's husband, father, son. He was a neighbor, a co-worker, a best friend.

Suddenly, I saw that the data that I had been working on for many months had obscured the story of searing loss, callous betrayal, and failed laws and legal institutions that defined the tragedy of asbestos exposure in my province.

To put it plainly, I came to understand that data needed to be grounded in the unique circumstances, the human drama, the joy and pain of each single life lived.

Maybe you know where this is leading.

You, the Class of 2017, are graduating at a moment when our capacity to harness vast troves of data is unprecedented, incredibly exciting in its own right, and being put to extraordinary use.

Scientists can effortlessly analyze Google trends to track the movement of pandemics in order to get ahead of them. Cities, like Los Angeles, are using smart technologies to track water usage as they fight some of the worst droughts in recorded history. And Johns Hopkins and other medical institutions are able to use immense data sets to predict which genetic mutations increase the risks of cancer and other diseases.

As an institution that believes in data-driven research, we herald these data-driven achievements. But we also know that we can never lose sight of the individual people who are the source of that data—and the concentric circles of family, friends, and community that surround them.

The vice dean for education at Johns Hopkins School of Medicine—and incidentally, the father of one of your classmates today—Dr. Roy Ziegelstein summed it up so well in a recent article he wrote in the Journal of the American Medical Association. He said, as ever more precise fields like proteomics, genomics, and epigenomics, "can be used to identify treatments that are uniquely tailored to the individual, the possibilities are almost unimaginable."

But when taken by themselves, something profound is missing. We also need, Roy argued, "personomics"—the study of the unique circumstances of the person at the heart of the data.

Or put another way by one of the founding four physicians of the Johns Hopkins School of Medicine, Dr. William Osler: "It is much more important to know what sort of a patient has a disease than what sort of disease a patient has."

Now, neither Roy nor I would argue that your focus should narrow to a single person. Nor should you reject the power of troves of data to revolutionize and optimize our ability to discover, to comprehend, and to heal.

Rather, the lesson I learned in my first job after college is this: To paint the fullest picture of any circumstance, you must find a way to do both—take the expansive view and look at things up close; understand the collective evidence and never lose sight of the incredible richness and complexity of the human story.

Your commencement speaker, Frank Bruni, excels at this.

In his nearly 30 years as an acclaimed writer and journalist, Frank has taken on some of the most challenging issues imaginable—from the polarization of our body politic, to the right to access a university education, to the slow but steady movement toward full equality for LGBTQ people. His reporting and analysis are informed by and awash in facts and data.

In prose both elegant and nuanced, he points us to trends that explain the scope of the issue at hand, but then unfailingly—and often through his own deeply honest and personal stories—Frank provides a window into the individual humanity that connects all of us.

So, graduates of the Class of 2017, I know—indeed, we all know—that you are an exceptionally talented, courageous, and resilient group of individuals.

As you prepare to leave us today and head off to your next challenge—your first job, the next step in your education, or an exploration of the far-flung corners of the world—I hope that you will embrace this world, in its vastness and its particularity.

May all that you have learned here aid you as you guide us to a better understanding of our universe. So that we may, in turn, better serve the people within it.

And never, never be afraid to follow—or talk about—your passions. You never know to where—or to whom—they will lead you.

Godspeed to you all. 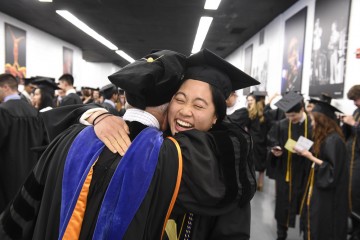 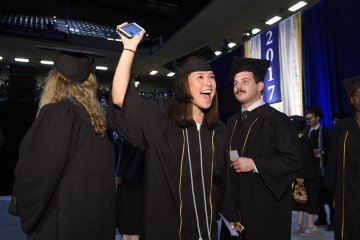