The Johns Hopkins baseball team has earned the top seed in the NCAA Mid-Atlantic Regional and will open its tournament run against Lesley on Thursday at 1:15 p.m.

Hopkins—which owns a 36-6 record for the season and has won 19 consecutive games—is making its 22nd appearance in the NCAA Division III tournament and its 13th in the past 17 seasons. Johns Hopkins is 38-39 all-time in regional competition with three regional titles to its credit—1989, 2008, and 2010).

Thursday's meeting will mark the first between Hopkins and Lesley. The Lynx (21-17-1 captured their first New England Collegiate Conference Championship to earn the leagu's automatic berth to the NCAA tournament.

Tickets will be available at the gate; general admission adult tickets cost $8, and students can get in for $5. Children under the age of 6 are free. 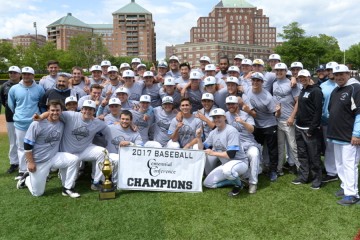 Hopkins walks off with its 14th conference championship

Published May 8, 2017
No. 5 Blue Jays rally to defeat Ursinus, 4-3, in Centennial Conference final