The Johns Hopkins men's lacrosse team earned the No. 6 seed in the NCAA tournament and will host Duke in a first-round game on Saturday.

The pairings for the 17-team tournament were announced Sunday night, with Big Ten Conference teams earning four of the top seven seeds—Maryland is seeded No. 1, Ohio State No. 3, Hopkins No. 6, and Penn State No. 7.

Saturday's showdown between the Blue Jays (8-6) and Blue Devils (12-4) will take place at 2:30 p.m. at Homewood Field and will be televised by ESPNU. The winner will advance to the quarterfinal round at Hofstra to face the winner of a first-round matchup between Ohio State and Loyola.

Hopkins is making its record 45th appearance in the NCAA tournament, where it owns a 70-35 all-time record and has nine NCAA titles to its credit. The Blue Jays' 70 wins and 18 championship-game appearances are both records.

Updated 1 p.m.: Tickets for Saturday's game are $10 for adults and $5 for kids ages 12 and under. Tickets for Johns Hopkins and Duke students with valid school ID are also $5. Tickets can be purchased online in advance or at the gate on game day. Gates and ticket windows will open at 1 p.m. Saturday. 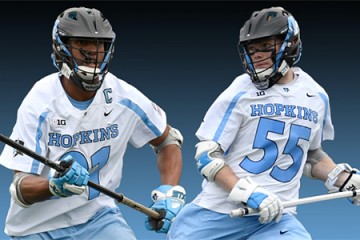