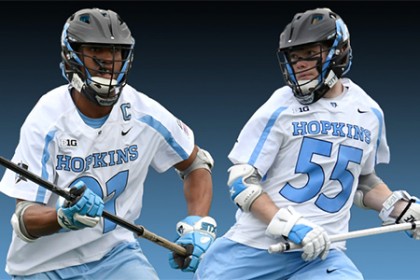 Senior defenseman Nick Fields and junior midfielder Joel Tinney were named to the first team. Both players are also among 25 finalists for the Tewaaraton Award, presented annually to the top men's and women's lacrosse players in the nation.

Additionally, senior midfielder John Crawley was one of six recipients of the Sportsmanship Award, given to individuals who have distinguished themselves through sportsmanship and ethical behavior. In addition, the student-athletes must be in good academic standing and have demonstrated good citizenship outside of the sports-competition setting.

Fields made the jump to the first team after being an honorable mention selection in each of the past two years. The co-captain has started all 13 games this season and has 22 ground balls and 14 caused turnovers to his credit.

Tinney, the 2015 Big Ten Rookie of the Year, ranks third on the team in goals (18) and points (24) and has scored the game-winning goal for the Blue Jays four times. He also leads the team in ground balls with 32.

Stanwick, a first-team all-conference pick a year ago, leads the team in assists (19) and ranks second in goals (21). He has registered at least one point in all 13 games this season and will carry a 46-game point-scoring streak into JHU's matchup against Ohio State in the Big Ten semifinals on Thursday night.

Marr leads the team in goals (24), ranks second in assists (17), and has a team-high 10 multi-point games on the season.

A complete list of conference postseason honorees is available online.

The Big Ten Conference tournament kicks off Thursday with No. 3 seed Hopkins (8-5) facing second-seed and host Ohio State (12-3) at 7:30 p.m. The winner will advance to Saturday's 7:30 p.m. championship game to face the winner of Thursday's semifinal matchup between No. 4 seed Penn State and top-seeded Maryland. All three games in the tournament will air live on the Big Ten Network.