Brad Sack, whose work led to treatment for diarrheal diseases that has saved millions of lives, dies at 81

R. Bradley Sack, a professor at the Johns Hopkins Bloomberg School of Public Health and a faculty member for more than 40 years at Johns Hopkins University, died Monday, April 24, at his home in Lutherville, Maryland. He was 81. 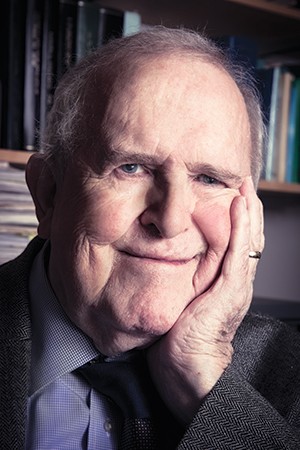 Sack's research into diarrheal diseases, which remain a leading cause of death among children under the age of 5, led to treatments that have helped significantly reduce the infant mortality rate. In the late 1960s, when based in Calcutta, he and colleagues discovered that cholera patients responded to a combination of intravenous solutions and drinks. At the time, the standard treatment was withholding water.

He was also an early pioneer of using oral rehydration therapy, or ORT, to treat diarrhea. The treatment would eventually become standard, adopted by the World Health Organization, and has been credited with saving more than 50 million lives in the past 30 years.

"Brad Sack was an investigator who made seminal contributions in the laboratory and the field, a clinician devoted to delivering high quality care, and a public health professional whose work has saved millions of lives," says Michael J. Klag, dean of the Bloomberg School of Public Health. "He was also gentle, kind, and compassionate."

He gravitated towards international infectious disease work early in his career. During his final year of medical school, in 1960, Sack completed a seven-week National Institutes of Health scholarship in Guatemala. Two years later, he completed a two-year infectious disease fellowship in Calcutta with the Johns Hopkins University School of Medicine.

Sack and several colleagues set up a lab and a clinic in Calcutta. It was here where he and his colleagues treated cholera patients with an IV solution containing sodium chloride and sodium lactate, and also had patients drink coconut water. The results were stunning: In two years, they treated about 700 patients and all of them survived. This study paved the way for what would become the standard treatment for cholera.

In 1968, in the same Calcutta lab, Sack and his colleagues discovered a bacterium called Enterotoxigenic E.Coli, or ETEC, which turned out to be the bacteria responsible for most diarrheal deaths worldwide, particularly children in developing countries. Working with Nathaniel Pierce, a Bloomberg School professor emeritus, Sack was among the first to do tests of oral rehydration therapy. ORT, which is delivered undiluted in easy-to-carry salt packages costing less than 10 cents, is credited with saving more than 50 million lives since its inception.

Sack permanently joined Hopkins in 1972, and held several positions at the School of Medicine. He then joined the School's Department of International Health in what was then known as the Johns Hopkins School of Public Health and Hygiene, as his professional base for the balance of his career. He was instrumental in the founding of the Johns Hopkins Enteric Infectious Disease Center, based at the Bloomberg School, in 1981.

They won’t tell you, but the humble Sack brothers are public health legends

"Brad Sack was an amazing mentor, humanitarian, outstanding clinician and scientist, as well as an extremely humble and compassionate person," says Mathuram Santosham, director emeritus of the Johns Hopkins Center for American Indian Health and a professor in the Bloomberg School's Department of International Health and the School of Medicine's Department of Pediatrics. "He mentored and touched the lives of numerous individuals like me. His life reminds me of the quote, 'Lives of great men all remind us, we can make our lives sublime, and, departing, leave behind us footprints in the sand of time.' Brad certainly left his footprints on many of us."

In 1981, Sack established two NIH-funded Research Centers, one in Lima, Peru, and the other in the White Mountain Apache Reservation in Whiteriver, Arizona. Sack served as director of the Johns Hopkins University Infectious Enteric Disease Study Center at the White Mountain Apache Indian Reservation through 1993. From 1991 through 1994, he was also head of the Division of Laboratory Sciences and the Division of Community Health at the International Center for Diarrhoeal Disease Research, Bangladesh. He also served as Director of the International Travel Medicine Service at Johns Hopkins Hospital, a program that he founded, from 1994 through 2011.

As a consultant to WHO since 1968, Sack advised governments and health programs in Indonesia, Thailand, Bangladesh, India, Turkey, North Yemen, Nigeria, Brazil, Trinidad, Togo, and China. From 1980 to 1987, he chaired the Steering Committee on Drug Development and Clinical Management for the WHO Global Diarrheal Disease Control Program. He also chaired the U.S. Cholera Panel of the U.S.-Japan Cooperative Medical Science Program and was associate director of the International Centre for Diarrhoeal Disease Research, Bangladesh. He co-edited two books and authored or co-authored more than 350 peer-reviewed publications. He was an editorial board member of Infection and Immunity, Journal of Clinical Microbiology, and Journal of Diarrheal Diseases Research.

Sack often worked with his brother David, also a professor in the Bloomberg School's Department of International Health.

His professional honors include the MacKay Award, which he received from the American Society of Tropical Medicine and Hygiene in 2011. He was elected to the Peruvian National Academy of Medicine in 2003.

Donations in Sack's memory can be made to the Child Health Foundation, 110 E. Ridgely Road, Timonium, MD, 21093.