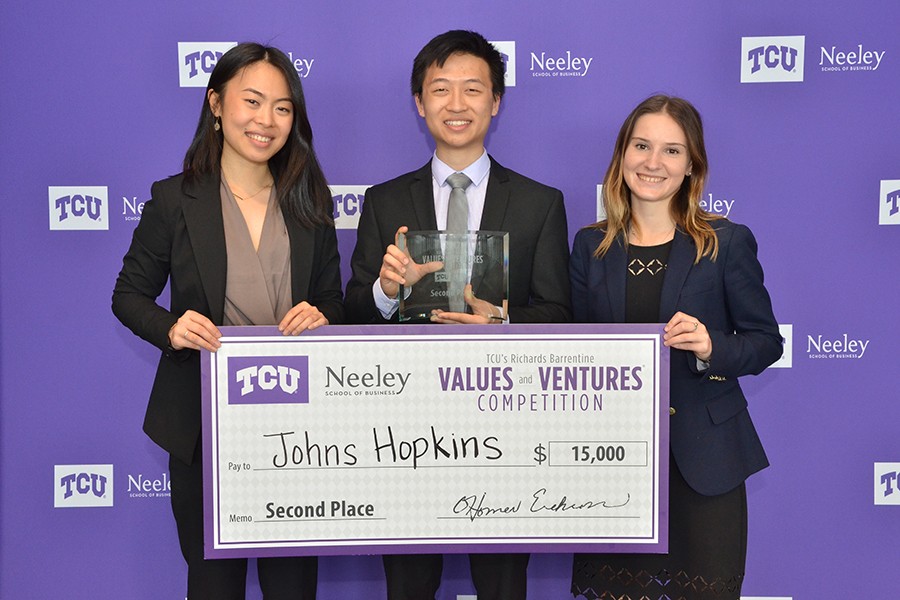 The Hopkins team competed against teams from 51 schools from across the U.S.—as well as from Canada, Croatia, and Bangladesh—during the April 21-22 event presented by TCU's Neeley Entrepreneurship Center.

"Being able to do well in such a large business plan competition really says a lot about the potential of the project. This is our first competition, but it's definitely not the last."
Eric Chiang
Johns Hopkins junior

The JHU team, Treyetech—note the "eye" in the name—addressed what they identified as "pain points" during partial corneal transplant, a procedure that involves replacing a thin layer of tissue, typically 8 mm in diameter and only 15 microns thick, in the innermost layer of the front of the eye. A characteristic of the corneal tissue is that it scrolls up on itself, making it extremely difficult for surgeons to unroll during implantation.

But Treyetech's method uses a specific folding configuration and proprietary device to package corneal tissue in such a way that when the surgeon implants the tissue in the recipient's eye, it pops open in place using its own natural mechanics.

"This business has been a work in progress for over a year now," said Chiang, who attributed Treyetech's second-place finish to the pitch and presentation delivered by team members Kali Barnes, Stephanie Cai, and Conan Chen, all juniors. "Being able to do well in such a large business plan competition really says a lot about the potential of the project. This is our first competition, but it's definitely not the last."

The Treyetech team formed in JHU's Center for Bioengineering Innovation & Design, or CBID, within the undergrad design team program. CBID operates within the Johns Hopkins Department of Biomedical Engineering, which is shared by the university's School of Medicine and Whiting School of Engineering.

Also on the team are first-year students Akash Chaurasia, Allison Rosen, and Parth Vora; and junior Anshul Subramanya. Their clinical sponsor was Allen Eghrari, an assistant professor of ophthalmology at the Johns Hopkins Wilmer Eye Institute.

The Values and Ventures Business Plan Competition challenges teams to apply for-profit business models to causes that benefit the environment, the community, or specific populations.