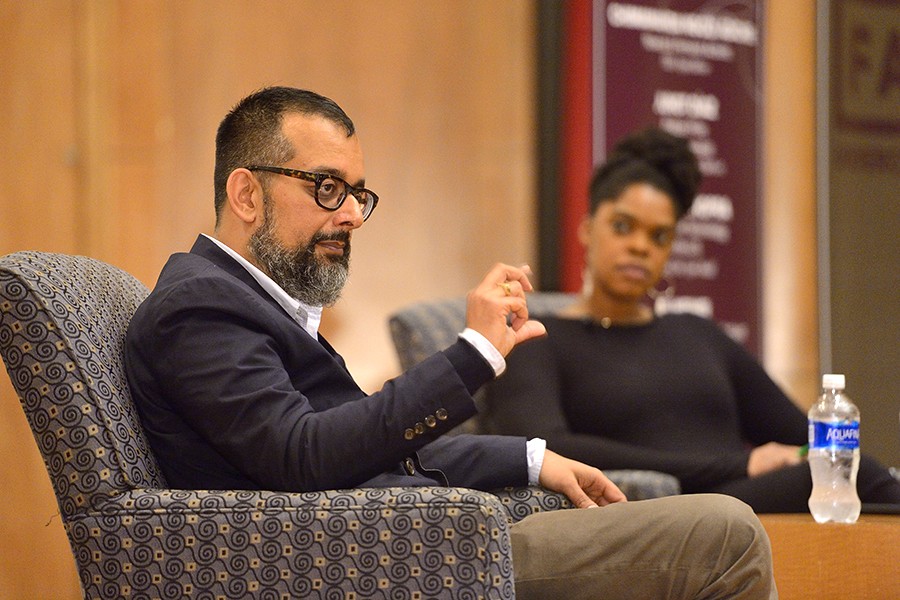 It's one part news, it's one part storytelling—it's done by people who don't have a background in traditional journalism.

These statements, which echoed through the partially filled Shriver Hall auditorium on Johns Hopkins University's Homewood campus, were those of Suroosh Alvi in a video montage highlighting his adventures on the job.

Alvi, a critically acclaimed journalist and the co-founder of VICE Media, participated in a talk Tuesday night as part of JHU's student-run Foreign Affairs Symposium. He sat across from Shawna Thomas, D.C. bureau chief for VICE, and had a conversation about the life of the company, the future of news and online media, and working in the field.

"I don't go out there actively seeking danger," said Alvi, when asked what had been the most dangerous thing he had ever done.

Even since it's days as a punk rock magazine, VICE has been known to push the boundaries of the newsgathering process, both figuratively and literally. Or as Thomas said, "be in the middle of things." Sneaking into Iraq without a visa, or getting tracked and shot at by ISIS—these are both situations Alvi said he experienced at VICE.

"We try to get as close to the subjects as we possibly can, and that's been part of our philosophy since day one," he said.

Jonathan Brown, one of three executive directors of the Foreign Affairs Symposium, said student organizers picked speakers who are part of a "movement against mainstream." Alvi and VICE certainly fit that description.

"[It's] one of the first media platforms of its time to do something like this," Brown said. "It's the cutting edge of what I think journalism will be in the future: these more personal approaches, these one-on-one interviews … filming in territories that may be difficult to get to otherwise."

VICE Media has 15 channels, a monumental international reach, and holds partnerships with TV networks such as HBO. On Monday, the company launched the newest division, VICE Impact, an advocacy and action channel.

"We have this opportunity to mobilize and effect change," Alvi said. "If we aren't doing that, than it is irresponsible. If we can improve some lives, it is a good thing."

More than 20 students lined up at microphones to ask (mostly two-part) questions to Alvi and Thomas. Many were consumers of VICE and interested in what was next for the organization.

"The mainstream news cycle is dominated by three big networks, chasing three big stories every day," Alvi said. "I think that it is really important that we don't get caught up in that news cycle. I think that is the void. America is not the center of the world."