Trailblazing expert in field of econometrics specialized in fiscal policy and government budget restraint, spent more than 40 years at JHU

Carl F. Christ, a distinguished economist whose career at Johns Hopkins University stretched more than 40 years, including two stints leading his department, died Friday. He was 93. 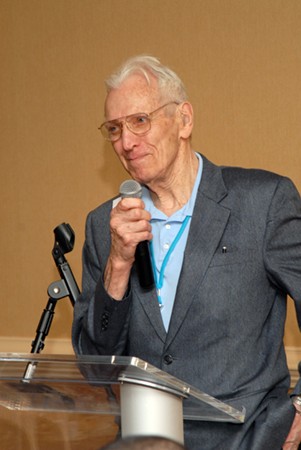 Christ was a trail-blazer in the field of econometrics, where statistical analysis puts economic theories to the test. In the late 1960s he wrote one of the first textbooks on the subject, a book that became a standard text used for decades in economics courses worldwide. Much later, in 1998, the Journal of Econometrics honored him with a special issue, a collection of articles by "friends, colleagues, and professional admirers of his life's work," that praised his contributions, his influence, and the "beauty" of his analytical work.

Christ, born in Chicago, graduated in 1943 from the University of Chicago, where his father was on the faculty of the business school. He did not initially pursue economics, but physics, teaching it at Princeton and working on the Manhattan Project, a research effort during World War II that led to the creation of nuclear weapons.

But Christ realized he wanted to use his mathematics ability to help the world in a different, more peaceful way. He once told the News-Letter, "During World War II, I lived in a house full of pacifists while I was working on the atom bomb. I then wanted to do something that had to do with human problems."

"He wanted to do more good in the world," said his daughter, Lucy Smith. "He wanted to be constructive and he saw economics as the path to do that."

In addition to pioneering the use of computers to test econometric models, Christ's niche was monetary and fiscal policy, especially government budget restraint. He is the author of four books, editor of one, and has more than 40 articles in journals and books, as well as more than 60 other publications.

"He was one of the greatest macro econometricians of the 1950s and 1960s," said Johns Hopkins economist Robert Moffitt. "He worked on the first wave of econometrically-based macroeconomic models of the economy developed at the Cowles Foundation at the University of Chicago, and became a leading authority in the economics profession on their estimation."

Students at Johns Hopkins chose him to win the George E. Owen Teaching Award in 1985, an award for outstanding teaching and devotion to undergraduates.

In 2008, when the university established a named professorship in his honor—the Center for Financial Economics' Carl Christ Professorship—his colleagues described it as an honor for "the legacy of a man who has been an inspirational teacher and mentor to generations of Johns Hopkins students."

"When he hired me he was a very distinguished scholar, and I appreciated how I could talk with him and get sensible advice—passed on as if I was his equal," Maccini said. "I tried to model myself after him in that regard."

"A renowned economist who was beloved by both his students and faculty colleagues, Carl was instrumental in making our Department of Economics the standard-bearer that it is today," she said." He will be remembered, not only for his pioneering work in econometrics, but for his love and dedication toward Johns Hopkins."

Christ was passionate about the university community, joining numerous efforts and boards, and even appearing in a few Johns Hopkins theatrical productions. He was a devoted member of "The Oldtimers," an informal club for retired faculty and staff.

"He held the thing together," said Matt Crenson, a Johns Hopkins political scientist and an Oldtimer. "He planned meetings, he made reservations, he discussed the menu, and he sent out notices—I hope we'll be able to survive without him."

Off-campus, Christ served on the Maryland Governor's Council of Economic Advisers and helped the Urban League by drafting brochures on financial topics, like how to buy a house with sustainable mortgage payments.

At Roland Park Place, where he lived, Christ joined the investment advisory committee and the hospitality committee. He could also be regularly spotted at the corner of 41st Street, with a "War is not the answer" sign.

In addition to his daughter Lucy, Christ is survived by his wife of 66 years, Phyllis; daughters Alice Christ and Joan Christ; and five grandchildren.