The university invited four experts to share perspectives on the issue as it engages in its own discussions of whether to end private investments in fossil fuel companies. Nearly a third of the university's $3.8 billion endowment is privately invested.

The divestment proposal, first generated by a group of students in 2012 and reissued in 2016, mirrors similar campaigns at universities across the country, said Johns Hopkins Bloomberg Distinguished Professor and discussion moderator Paul Ferraro.

Globally, the divestment movement has gained traction with organizations including city governments, faith groups, and hospitals, but many institutions have also held back from divesting, including Harvard University, Ferraro said.

The panelists Monday reflected the range and nuance of opinions that exist on the topic, with divestment framed on the one hand as a moral imperative, and on the other hand as a financially irresponsible move. Though all of the experts seemed to agree that the combustion of fossil fuels play a role in climate change, they argued for different approaches to the issue.

Students in the audience seemed most receptive to the pro-divestment stances of Ellen Dorsey, executive director of the Wallace Fund, a social progress foundation that is now 100 percent divested from fossil fuels.

Dorsey argued that "no mission-driven organization should hold market positions in industries that undermine its values or pose harms to its constituents," pointing to the health dangers of climate change as contradictory to Johns Hopkins' goals. She added that with the "exploding industry" of sustainable energy, divesting from fossil fuels makes sense financially.

"What began as an ethical call to action quickly became aligned with financial self-interest," Dorsey said, likening fossil fuel companies to outdated technology like landline telephones in the age of cellphones.

David Powell, from the investment management firm Brown Advisory, also attested to the practicality of investing in sustainability. He pointed to successful examples from his firm's own portfolio—including companies that specialize in LED lights and water-saving technologies—and examples of industry leaders such as Nike that are testing sustainable models.

Frank Wolak, an economics professor at Stanford University, presented figures showing that universities can only make a "trivial" dent on global greenhouse gas emissions through their actions. He proposed an alternative, more "cost-effective" approach for Johns Hopkins, encouraging students to create a university-scaled carbon pricing model that governments could replicate.

"In other words, you're building a model for the world," Wolak said, proposing as one idea an app that could monitor each person's carbon footprint on campus.

Rafael Castilla, director of investments at the University of Michigan's Investment Office, provided his own personal perspective on the holes in the divestment argument. He spoke of the hypocrisy he feels in "demonizing" fossil fuels when he and most others consume them every single day.

"I took a plane over here, [which] burned jet fuel," he said. "In the house I live in we burn natural gas."

He added that although there's "no question that there's been a lot of bad actors and irresponsibility in the fossil fuel industry," he believes divestment is an overly simplistic approach to a complicated, deeply embedded problem.

"I don't know that this is a kind of Nancy Reagan-type of approach where all you have to do is 'just say no,'" he said. "Sometimes I feel like the fossil fuel debate has that quality to it."

The Johns Hopkins divestment proposal is under consideration by the Public Interest Investment Advisory Committee, a panel of students, faculty, and staff appointed to advise the university on the social impacts of its investments.

Committee chair Jeffrey Kahn, director of the Berman Institute of Bioethics, wrote in an email that the panel will continue meeting regularly on the topic of divestment "until we've completed our analysis and come to our recommendations" to deliver to Johns Hopkins' board of trustees. Kahn said Monday's forum provided a "helpful discussion about … various ways of approaching such a decision." 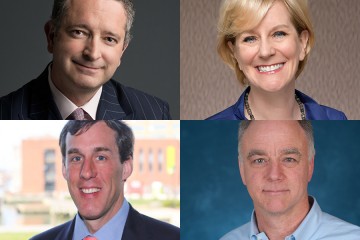 Published April 13, 2017
Where should the university invest its endowment, and what kinds of companies should be avoided? Experts weigh in