One of the reasons the Morning Joe hosts say they're disappointed with Donald Trump is that, as president, he doesn't resemble the man they knew for years beforehand. 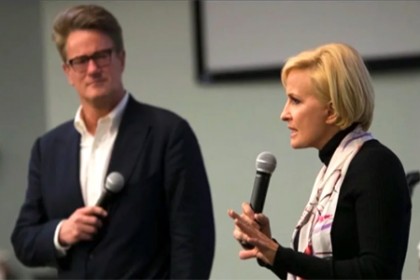 "This is so what's maddening to us," Scarborough said, contrasting Trump's performance as a "reality TV president."

Brzezinski said the difference has made her wonder if there's "a mental problem … or early onset dementia."

In their talk, the cable news co-hosts shared observations on the uncharted territory America now navigates in politics and media. Scarborough, a former Florida Congressman, and Brzezinski, a longtime correspondent, have anchored Morning Joe since 2007. They are known for their conservative and liberal points of view, respectively.

Brzezinski described the current era as "one of the most frightening things we've seen in our political media careers."

"It's exhausting," Scarborough said of the current pace of coverage, pointing to the pile-on of news that very day—the Senate using the "nuclear option" to clear a path to approval for Supreme Court nominee Neil Gorsuch; in-fighting in the White House; and deliberations over U.S. military action in Syria—discussions that resulted in action later Thursday when the U.S. launched 59 cruise missiles targeting a Syrian airfield.

"All of this has happened … since like 3:15 this afternoon," Scarborough said. "And that is what every day is like in the morning in our jobs. And it's been that way since the election. And I don't know if it's ever going to slow."

The co-hosts, who banter with each other with ease and last night poked fun at each other's equally "mean" families, take pride in using their contrasting political backgrounds for a more productive kind of clash. The different views, Brzezinski said, "allow us to prognosticate together after we duke it out."

Scarborough himself made two prognostications Thursday night: that chief strategist Steve Bannon would be out of the White House "sooner rather than later," and that America would see an independent president "within the next 10 years."

"We're America. We've got the First Amendment, we've got the Constitution. We've survived world wars… [and] recessions. We have an extraordinary system that's survived a lot through the years."
Joe Scarborough
MSNBC's 'Morning Joe'

Imagining post-Trump leadership, Brzezinski—whose daughter is an undergraduate student at Johns Hopkins—said she believes "we're in for a massive reset, politically and morally," after "hitting rock bottom."

Though the MSNBC hosts have faced criticism for what some see as a too-cozy relationship with President Trump, they say they try to strike a balance between open-mindedness and taking Trump to task.

"We challenged him right and left," Brzezinski said of their election coverage, recalling an incident in which Scarborough hung up on Trump on-air and noting that the show has banned Trump counselor Kellyanne Conway.

As to whether the screen time they and other cable news shows gave to Trump helped aid his rise, the Morning Joe anchors noted that he was a candidate giving full access.

"We would call Jeb Bush, begging him to come on the show," Scarborough said, while "Hillary was so controlled" that her interviews were scripts with tight parameters.

Scarborough also described Trump as an expert manipulator of the news cycle. For example, he said, he makes his most "outrageous" statements on Fridays in order to set up the news conversation for Monday and get "four days press on it."

In characterizing the Trump they knew pre-election, Scarborough shared a compliment he once gave to Trump on the "polite and respectful" behavior of his children. According to Scarborough, Trump's humble reply was, "That's only the case because they have a great mom."

Brzezinski recalled Trump once helping an immigrant she knew from the Dominican Republic get a job as a doorman that he still holds today at a Trump hotel.

"This is the guy we knew," Brzezinski said, before "the travel bans, the Muslim bans."

Despite the dark tone of politics right now, Scarborough said, the doomsday scenarios that Trump might become "an autocrat or a Nazi" are overblown. He pointed out that the president has met repeated challenges from all sides—the judicial branch, the legislative branch—even by members of his own party. And non-stop from the media.

"No—we're America," Scarborough said. "We've got the First Amendment, we've got the Constitution. We've survived world wars … [and] recessions. We have an extraordinary system that's survived a lot through the years."