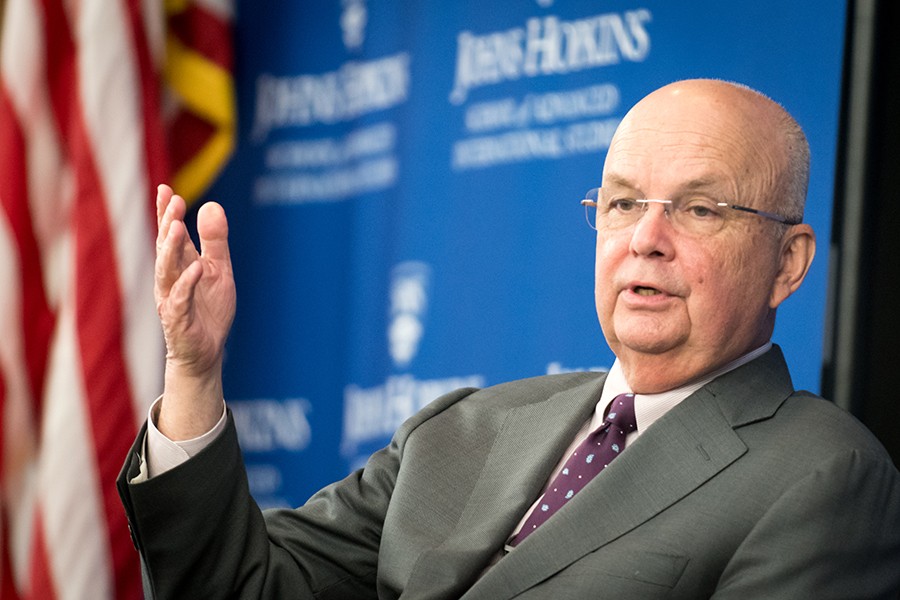 Hayden—former director of the NSA, the CIA, and a principal deputy director of national intelligence who served during the Clinton, Bush, and Obama administrations—warned that intelligence and security agencies face growing threats of not only cyberattacks and terror attacks but also what he called "macro" issues, which include a shakeup of the major players on the world stage.

"That world that's falling away? It's got the stamp 'Made in America' on it. It is the product of American statecraft, and frankly was sustained by American power for 75 years."
Gen. Michael Hayden
Former NSA, CIA director

"We're kind of seeing the meltdown of the post-WWI [Treaty of] Versailles," he told Vali Nasr, dean of SAIS, who moderated the conversation. "The colonially created countries, which were always a bit artificial and held in place by a brand of autocracy that is no longer en vogue, will not survive."

Hayden predicted that the conflict in the Middle East will likely lead to the creation of entirely new nation-states in the region based on ideology rather than historical borders.

"That world that's falling away? It's got the stamp 'Made in America' on it," he said. "It is the product of American statecraft, and frankly was sustained by American power for 75 years."

Hayden warned against myopic forms of national defense—strategies that fail to address macro issues. The chemical attack in Syria on Tuesday is an example of an act of terror that deserves an investigation and strategic response, but he said that it pales in comparison to what he considers an "existential" threat—the prospect that "Syria doesn't exist anymore, and it's not coming back."

To help illustrate his point, he drew an imaginary graph in the air, with the X axis representing the timeline of a security threat, and the Y axis representing the severity. He said that issues such as cyberattacks and terrorism don't rate high on either axis, and gestured toward the bottom corner of the graph where the X and Y meet.

And yet, he said, those issues dominated his work at the CIA.

"Driven by the urgency and the immediacy of the threat, I was down in that corner," he said. "And now I fear—to get modestly political on you—I fear we have a political leadership whose attention is really down there, too, and that's going to make it hard to get us up here to the macro issues."

Those crucial issues, Hayden said, include the U.S. relationship with China, and the North Korean nuclear program.

"The Sino-American relationship's success or failure will broadly define how bright or how dark the 21st century is," he said. But that relationship is complicated by North Korea, which he called, among other things, "ambitious, brittle, and nuclear."

North Korea, Hayden said, only exists because of its nuclear program, which the U.S. works to counter in part by deploying anti-ballistic missile systems to South Korea. China, however, fears the collapse of North Korea because it could lead to a refugee crisis, loss of control over North Korea's nuclear weapons, and the possibility of an American-friendly South Korean army mobilized in the region.

"My overly simplified metaphor is that North Korea is a bad toothache, and [the Chinese] know it's a bad toothache, and we keep saying, 'You know, you really should go in for a root canal,' and they keep saying, 'I'm just going to take some aspirin,'" Hayden said. "We have not yet convinced them of the dental discomfort to a sufficient level to begin to take more dramatic action [against North Korea]."

North Korea is among the big issues that Hayden said he gets asked about frequently—questions about what keeps him up at night.