Chronically ill low-income women who thought they were dying experienced a sharp reduction in domestic violence after getting access to a lifesaving treatment, a Johns Hopkins University-led study found.

The results, featured in a National Bureau of Economic Research working paper and highlighted in the bureau's latest Bulletin on Aging and Health, demonstrate for the first time how improving women's health can reduce cases of abuse by roughly 10 percent.

"[T]here is some evidence that women not only left violent partners, but were also less likely to get into violent partnerships in the first place."
Nicholas Papageorge
Johns Hopkins economist

"When these women who thought they were going to die realized this new treatment gave them many years to live, they faced stronger incentives to avoid abusive partners," said lead author Nicholas Papageorge, a Johns Hopkins economist.

Previous research has shown a connection between poor health and domestic abuse, of which there are an estimated 4.5 million cases a year in the United States alone. But until now researchers say no one has looked at whether improving women's health could change the likelihood of their suffering domestic violence.

To test this, Papageorge and his co-authors returned to a singular moment in health care history, the introduction in 1996 of HAART, or highly active antiretroviral therapy, which transformed HIV infection from a virtual death sentence into a manageable chronic condition.

The Women's Interagency HIV Study, an ongoing study that began in 1994, offered the authors a chance to see how HIV positive and negative women behaved before and after the treatment was available. The women in the pool were mainly low-income, non-white, and below national averages for education and employment.

When HAART came on the market, instances of domestic violence dropped by roughly 10 percent for women with HIV who had symptoms of the disease, compared to control groups of healthier HIV-positive women, the researchers found. The use of drugs, including crack cocaine and heroin, also dropped, by 15 percent, in the same pool of women. The drops in both domestic violence and drug use were even greater when looking at just black women in the same groups.

"We think the reduction happened because the women experienced a change to their expected health and longevity. They also experienced better prospects on the labor market," Papageorge said. "We started seeing changes immediately after the introduction of the treatment. Though it is difficult to say with our data, there is some evidence that women not only left violent partners but were also less likely to get into violent partnerships in the first place."

Papageorge said the findings suggest that giving women greater access to better health care can have far-reaching implications, even for abuse and addiction—two of the country's most persistent social problems. Better health care also seems to change outcomes by offering hope for a better life to women in seemingly hopeless positions—those plagued by poverty, lack of education, and underemployment.

"With other domestic violence interventions, women tend to go back. But here the change was medical and the women decided to make it on their own. They took this second chance and ran with it," Papageorge said. "This could be a longer-lasting change that keeps them away from these partners in the long run." 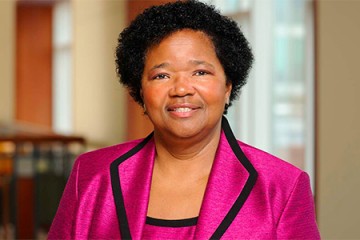 Published Fall 2016
Based on research out of Nursing, the myPlan app helps women and their friends determine whether their relationships are unsafe / Johns Hopkins Magazine