Every single one of the top 10 songs on Billboard's Hot 100 for the week of March 11, 2017, contains some element of electronic music.

Whether it's a sound made by a computer or a production process that relies on digital recording and editing technologies, almost all popular music owes a debt to electronic music, which began its slow climb into the mainstream from the academic research laboratories and avant-garde composer's desks of the 1950s. But that seepage into nearly every facet of music production has also winnowed an understanding of electronic music's wide range of ideas, practitioners, and points of view that have run through the art form since its earliest days. 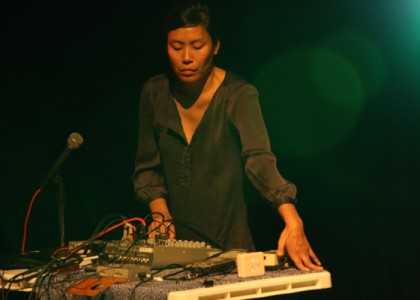 "I'm interested in electronic music that is not necessarily coming from a perspective that people would be familiar with," says Tom Boram, the DMC multimedia specialist who organized the event and a veteran electronic and improvised music composer, performer, and visual artist in Baltimore. "The sound of electronics is really common, and in Baltimore particularly, people are very comfortable with the sound of electronic music, in club music, rap music, or even circuit-bending and noise music. But there are other aspects to that have been happening for a really long time that don't get as much attention, like electroacoustic compositions, and there's been a lot of interesting electronic music from people coming from jazz traditions that doesn't really get as much attention, either."

The New Forms concert, which takes place at the Mattin Center on Friday night from 8 to 10:30 p.m., includes a few heady examples of electroacoustic composition and improvisation, as well as electronics-infused jazz:

The concert is a small sampling of electronic music's vast sea, but each artist or artist group is bringing its own musical and intellectual ideas to the art form. That range is a small reminder that electronic music can be incredibly abstract, but that it developed and evolved in the same turbulent 20th century that shaped abstraction in cinema, literature, and visual art.

As art critic Martha Schwendener recently pointed out in a book review for The New York Times, abstract art "had historical roots in Europe and colonial appropriation, and coincided with Einstein's theory of relativity, Saussure's lectures on structural linguistics, two world wars, the atomic bomb and the breakdown of Western ideas about human subjectivity. It became a Cold War weapon, with the West arguing that abstraction illustrated capitalist 'freedom,' while the Eastern Bloc's figurative Socialist Realism was repressive, just like its political system."

Electronic music, then as now, is shaped by the cultural and political tumult that affects artists' lives.

"I think that everything that we do artistically is political in some way, and I think that it's important for people to think of style in electronic music style as being political, especially in this era we're in right now," Boram says. "In the early 2000s, after Sept. 11 and the wars [in Afghanistan and Iraq], for me and the people I was working with at the time, I always felt like what we were doing was political. Obviously it's abstract, it doesn't have words, and there was no overt political expression. But I felt that the energy or the feeling was political. And I think that this era that we're in right now, people are back in that place. ... This [activity] wasn't happening three or four years ago."

The New Forms weekend includes a Saturday workshop led by Techne, Jones, and Thorpe's activist-minded nonprofit organization that encourages young female-identified women and girls to get involved in technology-focused art and music. The workshop runs 1-4 p.m. in the DMC's MakerSpace at the Mattin Center and is open to any Johns Hopkins students; registration available via Bookit.

On Sunday, a panel discussion features Jones and Thorpe; Stanley, who is also an adjunct new media professor at George Mason University's School of Art; and composer/educator Tara Rodgers, whose book Pink Noises is a collection of interviews with female electronic composers, musicians, and sound artists. In a review for the Journal of Popular Music Studies, Johns Hopkins English professor and electronic composer/musician Drew Daniel noted that "because the default setting for the history of electronic music remains technology driven rather than poetics driven, and this partiality has canonized a small set of mostly male inventors and composers, gender still matters."

Sunday's New Forms panel discussion suggests that social constructs like race and class still matter in the discussion of electronic music as well.

"It is where I feel I want to go into the personal, historical, and political aspects of electronic music," Boram says. "I feel like that's a chance to wrap up the vision of the whole event. I think that it's important to talk about how style and technique and technology are reflecting historical and political ideas, and I'm looking forward to that."