In the film Hidden Figures, there's a scene where Katherine Johnson, the brilliant NASA mathematician played by actress Taraji P. Henson, enters a board room full of exclusively white men—military officials and astronauts.

At that moment, the room's chatter halts to stunned silence. At that time, in 1962, it was unprecedented for a woman to appear in such a board room, not to mention an African-American woman in the segregated South.

But Camille Daniel, a mathematician and underseas warfare analyst at the Johns Hopkins Applied Physics Lab, said the scene resonates even today.

"I experience that all the time," Daniel said at a panel discussion yesterday. The "clickity clickity clack" of her high heels approaching, she said, can often silence a table of military and government men.

Daniel was one of five panelists who gathered at the Senator Theatre in Baltimore on Sunday for a special screening of Hidden Figures. The critically acclaimed film—which took home a Screen Actors Guild Award for Best Cast on Sunday night and is nominated for three Oscars, including Best Picture—served as inspiration for a winde-ranging conversation about gender and diversity.

The biographical movie shines light on the African-American women, including Johnson, whose expertise was pivotal to the early days of America's space program. From NASA's facility in Hampton, Virginia, these women worked as "human computers," helping launch John Glenn on his historic orbit around the Earth.

Most panelists at Sunday's event—hosted by Hopkins Biotech Network, Carey Connect, and the JHU Aerospace and JHU Women in Business Alumni Association affinity groups—said watching the film was their first real exposure to the women's story.

"I wonder how many other stories we don't know yet," said Marguerite Hoyt, a writer and historical consultant who earned her Ph.D. from Hopkins.

Sometimes in meetings at STSci, he said, a "woman will contribute a great idea, and it's ignored"—until a man makes the same suggestion later and gets credit for it.

"We have to make sure when that happens to call someone out on it," Sembach said.

Patricia Ordóñez, a Johns Hopkins alum who is now a computer science professor at the University of Puerto Rico Río Piedras, described difficulties she encounters because she does not fit the stereotypical image of a coder. She said she often gets condescending questions like, "Do you know what a batch file is?"

The panelists noted that although the number of women earning undergraduate degrees in the sciences is rising steadily, their trajectory to senior positions hasn't followed suit.

"For leadership positions, the numbers for women at the top is woefully low," said Lynn Johnson Langer, director of regulatory science and enterprise programs for JHU's Advanced Academic Programs.

Sembach said one way his institute is attempting to tackle that problem is by adapting some of its hiring methods, including altering the language of job postings to be more encouraging to women. He also spoke of progress that's come, over the decades, from the groundbreaking Baltimore Charter for Women in Astronomy, which a group of women at his institute enacted in the early 1990s.

The conversation was moderated by Beverly Wendland, dean of JHU's Krieger School of Arts & Sciences, and Ashley Llorens, chief of the Intelligence Systems Center at the Johns Hopkins University Applied Physics Laboratory. 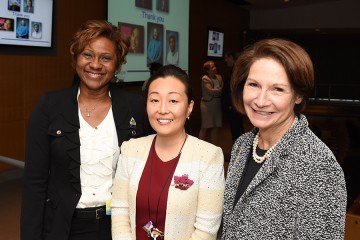