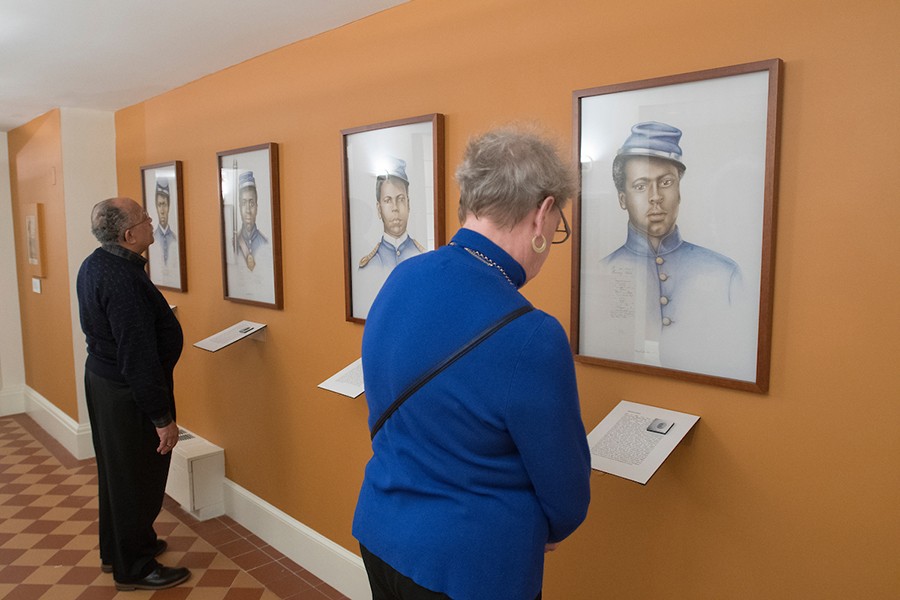 The soldiers' faces portrayed in the Evergreen Museum and Library's new Civil War exhibit aren't those that typically get the glory. In fact, if not for an unlikely turn of events, they would have been forgotten altogether, pictures tucked away in a laundry room with detergent and fabric softener.

"These are the other faces that held the union together during the Civil War. Here are 17 men who put their lives on the line for the same cause."
James Archer Abbott, Evergreen Museum director

But historians at the Smithsonian National Museum of African American History and Culture realized the historic value in miniature photos of 17 black soldiers, and found a home for them in the new institution's permanent collection. And a Michigan artist and genealogist turned each of those tiny photos—none larger than a coin—into life-sized portraits, the essence of Seventeen Men: Portraits of Black Civil War Soldiers, now on view at the Evergreen through June 2017.

Everyone knows about Grant, Sherman, and Lincoln, but "these are the other faces that held the union together during the Civil War," says James Archer Abbott, the Evergreen's director and curator. "Here are 17 men who put their lives on the line for the same cause."

Artist Shayne Davidson, who stumbled across the miniature album while researching a friend's family tree, felt compelled to find out more about the men, all from the 25th Infantry Regiment, United States Colored Troops, who served under Capt. William A. Prickett. 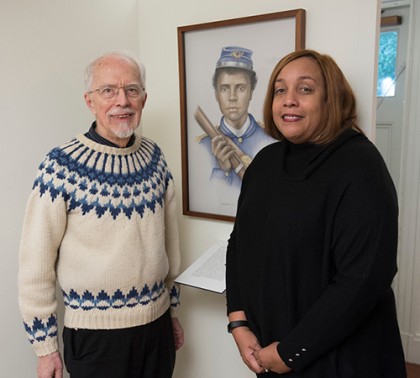 Prickett had saved the album, just two inches wide and sealed with a metal, diary-like clasp, and it stayed in his family until just a few years ago, when family members realized how rare it was. At the time, Prickett's great-granddaughter had been keeping it in her laundry room.

Davidson thought that life-like colored pencil portraits, combined with as much biographical information as she could find, could convey these men's lives both as individuals, and as members of a regiment.

"We hear a lot about the famous people, but we don't hear about the ordinary people, especially these men who were in such a difficult position," Davidson says. "I wanted to see them life-sized. I wanted to see what they really looked like."

The exhibit groups the faces of the oldest and youngest soldier—a 50-year-old and a baby-faced young man of 15. There are two soldiers who were sold into the military from slavery. There is a man from Baltimore, and two brothers who resemble each other in the eyes.

When the exhibit opened on Dec. 8, the granddaughter of one of the soldiers, Vanessa Tall Bryant of Nashville, Tennessee, met Prickett's great-grandson, Cory Atwood of Silver Spring.

Both spent a lot of time looking at the portrait of Bryant's grandfather, James Tall, which hangs at the end of the hallway. The private, an escaped slave, is depicted gazing straight ahead, clutching what looks to be a musket. He was 18 and stood just over five feet tall.

He survived the war and became a farmer in Tennessee. Bryant's dad was born when her grandfather was nearly 80.

"I've heard these stories since childhood, but the probability of ever seeing something like this, it's pretty surreal," Bryant said at the exhibit, adding that an orchid at her home, which rarely blooms, has been in full flower ever since she put a copy of her grandfather's portrait nearby. "It's like he's saying you found me—finally."