Ted Poehler, whose career at Johns Hopkins spanned more than 60 years, dies at 81

Materials scientist, former vice provost for research retired from the university in June

Theodore O. Poehler, whose career at Johns Hopkins University spanned more than 60 years—from his days as an undergraduate student to his service as a materials scientist in the Whiting School of Engineering, teacher, and university administrator—died Saturday. He was 81. 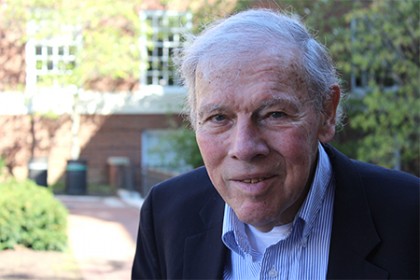 Poehler served at one time as vice provost for research and most recently as a research professor in the Department of Materials Science and Engineering until he retired from the university in June. The cause of death was complications from liver cancer.

Poehler helped to lead research in the academic departments on the Homewood campus, part of the university's efforts that have for decades amounted to more investment in research than any other university in the country. The National Science Foundation announced last week that in 2015, Johns Hopkins led all universities in the United States in research spending, the 37th consecutive year that the institution has held this distinction.

Ed Schlesinger, dean of the Whiting School of Engineering, said Poehler "contributed enormously to the university," and mentioned specifically, among other things, his leadership in the Animal Care and Use program and the Office of Research Projects Administration. In the Whiting School, Poehler helped establish the new Human Language Technology Center of Excellence, and the Institute for NanoBioTechnology—both significant interdisciplinary research programs.

Along with his administrative leadership in research, Poehler never lost his enthusiasm for teaching, Schlesinger said.

"One of Ted's central passions was teaching," Schlesinger said. "He believed that sharing his knowledge and enthusiasm for engineering with the next generation was one of the most important things he could contribute to his discipline."

Howard E. Katz, a professor in the Department of Materials Science and Engineering, remembered Poehler as a "highly effective and influential instructor in the area of electronic properties of materials and solid state physics of materials. Students in my group who took his classes benefited enormously from them, and became higher level researchers because of the experience."

While serving as a professor, researcher, and administrator under seven university presidents, Poehler emerged as an authority on the complexities of research at Johns Hopkins.

Ted Poehler looks back at his 55 years at Hopkins

Ted Poehler retires from Department of Materials Science and Engineering

When Poehler announced in 2007 that he was stepping down from his position as vice provost for research, Kristina Johnson, then the university's new provost and senior vice president for academic affairs, said she had learned to rely on Poehler for his "encyclopedic knowledge of the research enterprise at Johns Hopkins."

Poehler was born and raised in Baltimore as the only child of Theodore Otto Poehler, Sr., who worked at Baltimore Gas and Electric Co., and Marion (nee Rhode) Poehler, a homemaker. A graduate of Baltimore Polytechnic Institute, Poehler came to Hopkins in 1952 as a 16-year-old freshman.

He told a Johns Hopkins interviewer in 2007 that he "took a fairly eclectic program as an undergraduate," starting in chemistry, then moving on to electrical engineering.

That's where he first took an interest in materials science, which focuses on discovering and designing new materials, with emphasis on solids.

"I was very interested in what was happening in the field," Poehler said in the 2007 interview. "This was the time when new technologies were coming out, such as semiconductors. That was what attracted me, and what I focused on as a graduate student."

He sustained that interest through a career in which he wrote or co-wrote 158 published papers and held 14 patents.

"Materials science has been an exciting area to pursue because it involves a wide range of subjects including chemistry, physics, theory, and cutting edge laboratory experimentation," Poehler told a Johns Hopkins interviewer in March.

After earning his doctoral degree from Johns Hopkins in 1961, Poehler began his career as a researcher at the U.S. Army's now-defunct Ballistic Research Laboratory. He served in the U.S. Army at the Aberdeen Proving Grounds from 1962 to 1963.

In 1963, he joined the Applied Physics Laboratory and worked there for 26 years in several capacities, including assistant supervisor in the Plasma Dynamics Group, supervisor of the Quantum Electronics Group, and director of the Milton S. Eisenhower Research Center.

"He was very devoted to his work," said his son, Jeff Poehler, of Catonsville. "He just enjoyed his work. I think that's why he kept working when he could have retired."

At the same time, his son said Poehler was "very generous as a father and as a grandfather. He was generous with his time and paying for our education, helping his grandchildren."