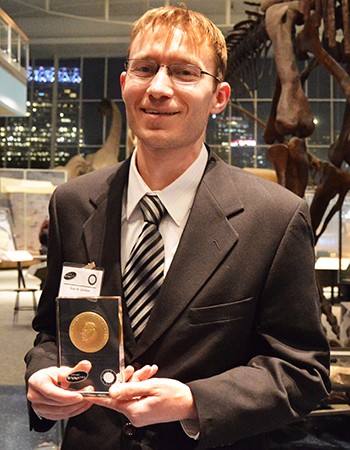 The Outstanding Young Engineer award was established in 1988 to recognize and celebrate the extraordinary contributions of young Maryland engineers, building on the success of the Outstanding Young Scientist award program launched by the academy in 1959.

Gardner, who works in APL's Asymmetric Operations Sector, is a member of the laboratory team working on the Federal Aviation Administration's Airborne Collision Avoidance System X project. Set for fielding in 2018, ACAS X will warn pilots when it senses a risk of midair collision, and do so with a higher level of safety and flight-operation suitability than current technologies.

Gardner is part of a smaller group that has been developing and applying so-called "formal methods"—math-based techniques for developing and verifying software and hardware systems—to make sure the critical components of ACAS X will perform as designed. His team used one particular approach to compute the probability of events like near mid-air collisions for all possible aircraft encounters within a particular space and within models of pilot behavior, dynamics, and ACAS X system performance.

"Ryan's efforts are leading to real improvements in ACAS X, and his work will readily apply to new standards for unmanned aircraft collision avoidance as well," said Jill Newton, Gardner's supervisor in the Asymmetric Operations Sector's Enterprise Systems Group. "He's the consummate engineer, dedicated to solving complex problems and deeply motivated by the impact he's making to increase the security and safety of critical systems."