Castile, 32, was fatally shot by police in Minnesota in July following a traffic stop

Philando Castile was stopped by police at least 46 times and incurred more than $6,000 in fines before his July 6 death. A collection of traffic stops, late fees, and repayments followed Castile from the day before his 19th birthday—when he first received his license—to roughly a week after his 32nd birthday—the day he was fatally shot by police during the final traffic stop. 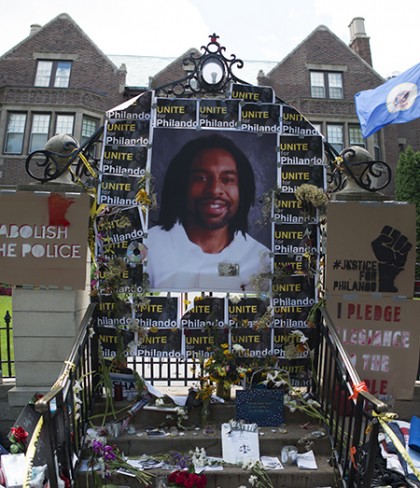 Image caption: A memorial for Philando Castile outside the Governor's Mansion in St. Paul, Minnesota. Castile, 32, was fatally shot by police during a traffic stop on July 6.

These staggering pieces of data, a cell-phone video of Castile's death, and a look at the connection between this incident and policing in cities such as Baltimore, all played integral roles in a presentation and conversation led by NPR correspondent Eyder Peralta at Johns Hopkins University's Mason Hall on Thursday night.

JHU's Office of Multicultural Affairs, Center for Africana Studies, Center for Social Concern, and Urban Health Institute—known collectively as the Johns Hopkins Social Justice and Equity Collective—sponsored Peralta's talk as part of a series of lectures under the theme "Unpacking Baltimore."

Castile died hours after being shot by a police officer. Moments after the shots were fired, his girlfriend, seated next to him in the car, began broadcasting the scene live on Facebook with her cell phone. Millions saw graphic images of the bloodied Castile as his girlfriend told viewers what had just happened.

"You shot four bullets into him, sir," she tells the officer in the video. "He was just getting his license and registration, sir."

Castile, who was a cafeteria worker, struggled to pay off the fines or settle charges in court. But he did try.

The repeated offenses endured by the late Philando Castile begin a conversation about policing in America, and more specifically, cities such as Ferguson, Missouri or Baltimore. The most common question: Are black men disproportionately targeted by police officers compared to everyone else?

The Driving Life and Death of Philando Castile

"In Baltimore, the Justice Department found that police were given template excuses for stopping pedestrians in mostly black neighborhoods. They made 520 pedestrian stops for every 1,000 black residents, and only 180 stops for every 1,000 white residents," Peralta said. "What's more, Justice found that an arrest report template provided by a police supervisor to his officers did not prompt the officers to fill out a race or ethnicity. Instead 'black male' was already filled out."

Audience members were able to ask questions about the data collected by NPR in the Castile case, and also about solutions to problems in Baltimore. The end of Peralta's presentation transitioned into a free discussion about race, class, and prejudice in the city.

Carla Hopkins, JHU's assistant director of diversity education, said she appreciated the open dialogue during the event and the presentation's timeliness.

"I thought it was really wonderful and very valuable to see … what happened prior to what we saw on social media, which was, you know, Mr. Castile's demise," she said. "I really appreciated a journalist perspective and lens by which the information came."

Students had similar thoughts on the presentation. Lydia DuBois, a Class of 2018 sociology major, said she was drawn in by the topic of last night's event and wanted to take advantage of it.

"I think here, with a very academic rigorous school, a lot of people don't take the time to just have discussions outside of the classroom," DuBois said. "I really liked that the audience was able to respond with not only personal anecdotes, concerns, peoples' own values. I'm feeling now that I'm leaving wanting more information."

DuBois added that after Tuesday's election results, she wanted more information on how the presidency effects police departments.

The topic of President-elect Donald Trump found its way into the night's conversation, mostly with a lot of questions, ambiguity, and lack of faith expressed by the audience.

"Under the Obama administration, the Justice Department's civil rights division has reviewed an unprecedented number of local law enforcement agencies under the power given to the feds by the 1994 Violent Crime Control and Law Enforcement Act," Peralta said about the upcoming exchange of power.

"President-elect Trump hasn't talked specifics, but overall he has taken a pro-police stance. I think it's safe to say that federal review of law enforcement agencies by the Justice Department's civil rights division will slow down, just like it has under other Republican administrations." 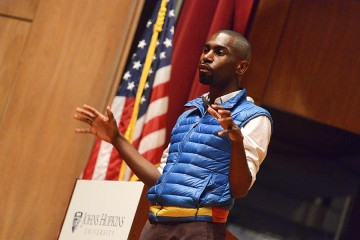 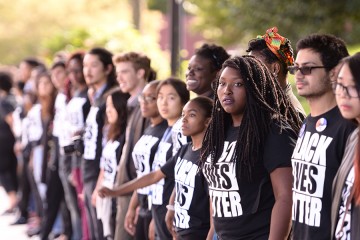 Published Oct 7, 2016
More than 400 students, faculty, and staff line up along Charles Street as part of Black Lives Matter demonstration 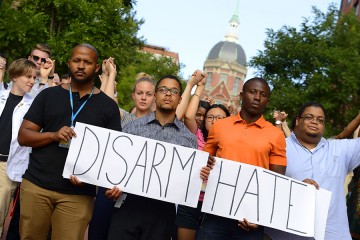