School of Medicine students organize gathering to protest recent acts of violence across the U.S. 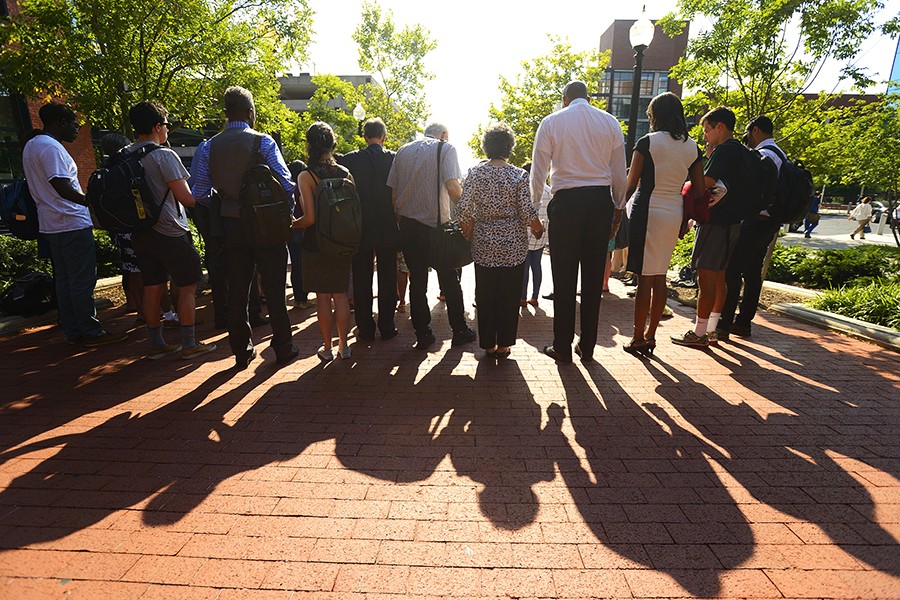 Image caption: A small crowd gathered outside the Armstrong Medical Education Building on Johns Hopkins' East Baltimore campus on Tuesday afternoon for a vigil and moment of silence to honor the victims of recent acts of violence that have shaken the nation.

A crowd assembled Tuesday afternoon on Johns Hopkins University's East Baltimore campus—just steps away from where a 2014 student-organized "die-in" took place—to protest the recent acts of violence that have shaken the nation.

"We as a community stand together to say that the injustices faced by those within our community and the communities we serve will not be tolerated."
Miriam Akeju, JHU graduate student

Those joining the throng outside the Armstrong Medical Education Building held a vigil and moment of silence to honor the victims of the Orlando nightclub shooting that left 49 people dead last month; Alton Sterling and Philando Castile, two black men who were shot and killed last week by police officers; and the five Dallas officers who were fatally shot by a gunman during a protest rally last week.

"We're committed to creating a culture that supports our students and embraces diversity and inclusion," said James Page, vice president and chief diversity officer of Johns Hopkins University School of Medicine, who attended the gathering. "Today's vigil demonstrates that in the face of the recent devastating violence that has occurred around the country, the Johns Hopkins community will support each other and remain strong and united in that commitment."

For Miriam Akeju, a graduate student in the School of Medicine and one of the many student organizers of the vigil, it was time to take a public stand in response to the shootings.

"This vigil serves to honor and remember the lives lost due to violence and fear," she wrote in an email to the Hub. "We as a community stand together to say that the injustices faced by those within our community and the communities we serve will not be tolerated."

The event was attended by members of the Johns Hopkins chapter of the Student National Medical Association, which is dedicated to supporting underrepresented minority students in medicine. In an emailed statement, member Marc Shi noted that "it's becoming clearer and clearer that we, as members of a medical community and as members of the Baltimore community, can't ignore injustice and violence that is happening around us and targeting members of our own communities."

But for some of the event organizers, the persistence of violence in the U.S. is cause for despair. 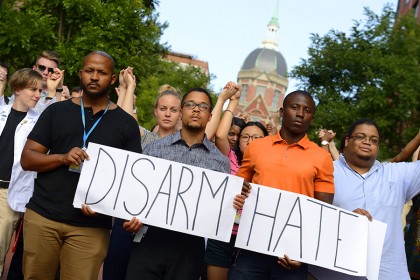 "When these things happen, they take from you," said postdoctoral fellow Marc Edwards. "They take from you your time, your energy, your sanity, your hope. And these events are iterative: they happen again and again, and sometimes back to back. ... It necessarily saps you of your energy and the resources you need to succeed. I am most grateful for the fellowship—the community of people who are going through the same thing—and that we can draw strength from each other. It fills me back up."

In an email circulated among the School of Medicine community late Tuesday, Paul Rothman, dean of the medical faculty; and Ronald Peterson, president of the Health System, offered words of support for those affected by the recent shootings, noting that many students and employees of Johns Hopkins may be "understandably experiencing a range of emotions—from sorrow and frustration to anger, fear, and helplessness.

"Meaningful change requires the full and active engagement of all members of the Johns Hopkins Medicine community," they continued. "We must continue to look inward as an institution and consciously take action to promote a culture of inclusivity and trust. Just as adequate health care is a universal human right, so too is the ability to feel safe in one's own skin."

Added Johns Hopkins University President Ronald J. Daniels about recent events: "As a university, these moments call us to consider new ways to stand together and respond to our national challenges. Whether through our research into gun policy, police training, or racial disparities; through our peaceful protests; or through a renewed commitment to change within our own communities, Johns Hopkins will work to contribute to lasting change." 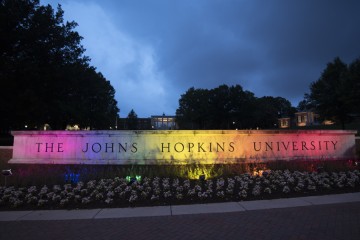 Published June 17, 2016
JHU will display the colors of the pride flag until June 28