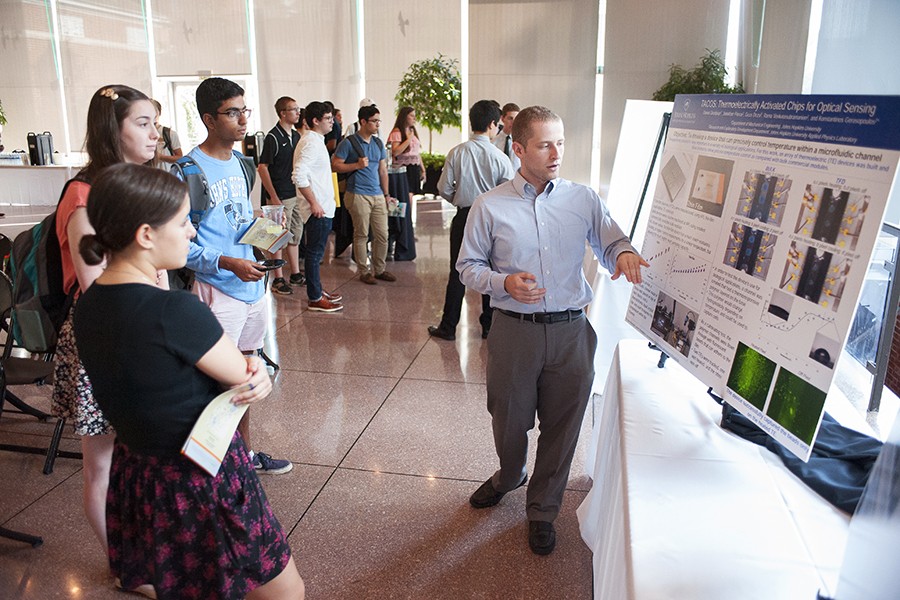 Kyle Candela's conversational style is somewhat measured. But ask him about his experiences working as an intern at Johns Hopkins University's Applied Physics Laboratory last summer, and he becomes more effusive.

"The program gave me a chance to work with the smartest people I've ever met."
Kyle Candela, JHU graduate student

"I found the work interesting and challenging, and I learned a ton," said Candela, who graduated in May with a degree in mechanical engineering and is in the five-year master's program in that discipline now. "Also the program gave me a chance to work with the smartest people I've ever met."

Candela was one of dozens of students from JHU's Whiting School of Engineering who gathered last week in Glass Pavilion on the university's Homewood campus to kick off this year's application season for RISE@APL, a prestigious and competitive paid summer internship program that began three years ago as the Summer Program in Undergraduate Research, or SPUR. Since 2014, the program has provided highly qualified undergraduates with the opportunity to conduct research at the Applied Physics Lab, working under the mentorship of APL researchers on projects ranging from ballistic missile systems and computer vision to prosthetic limbs and secure mobile communications.

At the event—which included a poster session, presentations, and plenty of refreshments—Ed Schlesinger, dean of the Whiting School, told the crowd that RISE@APL now offers more students the chance to take advantage of this unique opportunity to work with mentors at one of the country's premier engineering and research and development centers.

"Some things haven't changed about the program: it's still in the summer, it still offers good pay, and it's still an amazing experience to work at APL, an intellectual powerhouse. But the program is now larger in scope in that RISE is open to both undergraduate and graduate students who are U.S. citizens," Schlesinger said. "Like the original SPUR, RISE exemplifies our deep commitment to integrating research and hands-on experiences into engineering education." SPUR itself has been reimagined, too. It now stands for Strategic Partnerships for University Research at APL. The new SPUR includes not only the RISE summer internships, but also programs that bring APL staff to the Homewood campus to do research at Whiting, and send Whiting faculty to APL.

Jerry Krill, assistant director of science and technology and chief technology officer at APL, expects these collaborations to contribute the kind of "defining innovations" that the Applied Physics Lab has become known for over its almost 75-year history.

"As we look to the defining innovations 25 years from now, when APL has its 100th anniversary, some of them could well be what our [RISE] students have been working on this past summer, such as brain-controlled prosthetics, biological sensors, interplanetary space travel, robotics, autonomy, and exotic materials," Krill said.

Applications are being accepted now for the 2017 RISE@APL summer session. Students have until Dec. 31, 2016, to apply. 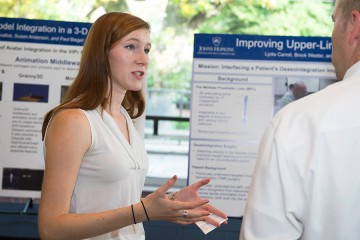