They are among 79 new members selected for major contributions to the advancement of the medical sciences, health care, public health

Paul B. Rothman and Jeffrey P. Kahn of Johns Hopkins University are among 79 new members elected to the National Academy of Medicine during its annual meeting today, the group announced. 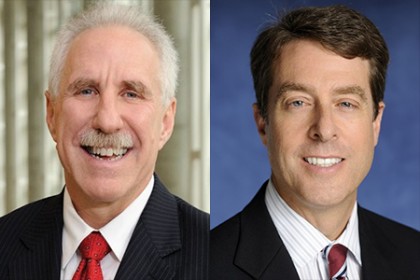 Rothman is dean of the medical faculty and CEO of Johns Hopkins Medicine, overseeing the Johns Hopkins University School of Medicine and the Johns Hopkins Health System, which encompasses six hospitals, hundreds of community physicians, and a health plan. A molecular immunologist, Rothman focused his research on immune system molecules known as cytokines. He investigated the role these molecules play in the normal development of blood cells and the abnormal blood cell development that leads to leukemia. He also studied the function of cytokines in immune system responses to asthma and allergies.

Kahn is the director for Johns Hopkins Berman Institute of Bioethics and a professor of Bioethics and Public Policy at Johns Hopkins University. He works in a variety of areas of bioethics, exploring the intersection of ethics with health and science policy, including human and animal research ethics, public health, and ethical issues in emerging biomedical technologies. He is chair of the National Academies Board on Health Sciences Policy, and has previously chaired its Committee on the Use of Chimpanzees in Biomedical and Behavioral Research and the Committee on Ethics Principles and Guidelines for Health Standards for Long Duration and Exploration Spaceflights.

Membership in the National Academy of Medicine is considered one of the highest honors in the fields of health and medicine. It recognizes individuals who have demonstrated outstanding professional achievements and commitment to service. Members of the academy advise the U.S. government on medical and health issues.

New members are elected by current active members through a selective process that recognizes individuals who have made major contributions to the advancement of the medical sciences, health care, and public health. The newly elected members raise NAM's total active membership to 1,947 and the number of international members to 146.