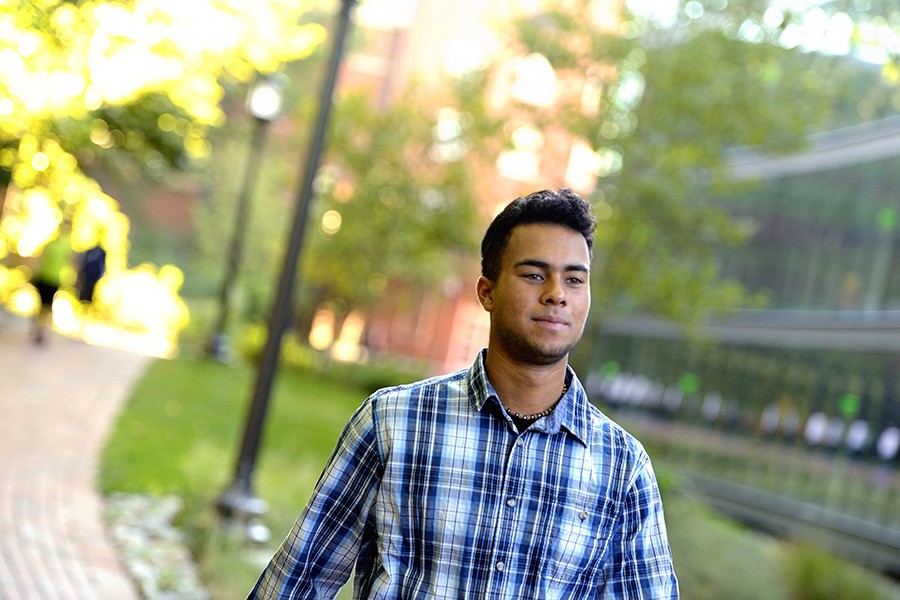 Ernie Bates landed in Tocumen International Airport in Panama. The sunny, summer weather was much stickier and humid than back home in San Francisco. But the absence of his friends and family—whom he would not see for six weeks—was the most nerve-racking.

It was during this trip—while in a rural Azuero Penisula community of approximately 500 people during the summer of 2015—that Bates' years of living with multilingual parents and traveling the world transformed into a passion for international culture and, in his mom's words, advocating on behalf of the "have nots."

This passion inspired Bates to apply to an international studies program at Johns Hopkins University that combines bachelor's and master's degree studies.

"Because of my multicultural background ... I want to learn about things all over the world," said Bates, now a first-year student at JHU. "The Johns Hopkins curriculum would really tailor to my interests by being able to take globally oriented classes."

"Prospective students who already know their interests lie in international studies or global health are excited about the idea of being connected to world-class resources and mentors who are established and well-respected in these fields."
Ellen Kim, JHU dean of undergraduate admissions

So when Johns Hopkins accepted him into this limited-enrollment program, Bates—who has lived in Hong Kong, London, New York, New Jersey, and California—made his most recent move and became a Blue Jay. He's anticipant of the experiences college life might bring and reflective on the role his trip to Panama played in his decision to claim his spot in one of the university's two direct matriculation programs.

The direct matriculation programs are designed to meet students' interests and allow them to build their own academic paths. They are especially appealing to students who already have a strong interest in the subject area for which they are applying, said Ellen Kim, dean of undergraduate admissions at Johns Hopkins.

"Prospective students who already know their interests lie in international studies or global health are excited about the idea of being connected to world-class resources and mentors who are established and well-respected in these fields," Kim said. "For students who care deeply about these topics, it's an opportunity to ensure their post-graduate studies will support their long-term goals while still enjoying the exploration and growth that comes with the undergraduate experience."

Bates' interest was sparked, in part, by a desire to learn more Spanish.

His parents—his dad, Ernest Bates Sr., born to an African-American man and first generation Japanese woman; and his mom, Marlene Bates, born to a French mother and a father from the French Caribbean—inspired Bates to become bi- or trilingual.

They were excited about Bates' trip to Panama—though a bit apprehensive when he opted not to call home during the six weeks.

"He wanted to test out what it would be like when he went to college," his mom said. "We were mortified and were truly hoping he was well and perhaps even still alive."

While his parents awaited his call, Bates' struggled to communicate and understand his new cohabitants' thick accents. But the combination of watching TV, speaking with this host mother and father, and repeatedly hearing the language helped Bates to comfortably hold conversations by the end of the six weeks.

Bates returned home with an aspiration to pursue a career that would afford him new cultural experiences and the opportunity to speak different languages.

"Ernie gets viscerally incensed when he witnesses inequity and prejudices," she said. "He really wants to right the world."

Bates' dad thinks his son would be make a successful entrepreneur.

"Given his interpersonal and leadership skills and current passion for international relations," he said, "I wouldn't be surprised to see Ernie in an ambassadorial role someday."

Bates is still unsure what career he might choose, but he knows that with undergraduate and graduate degrees from Johns Hopkins, he'll have plenty of options.

"I haven't really thought that far down the road," he said. "But I've always had the dream of having a career where I can travel … and go visit different countries all over the world."