Marc Edwards, credited with uncovering water contamination in Flint in 2014, discusses similar episode in Washington, D.C., that he says was 30 times worse 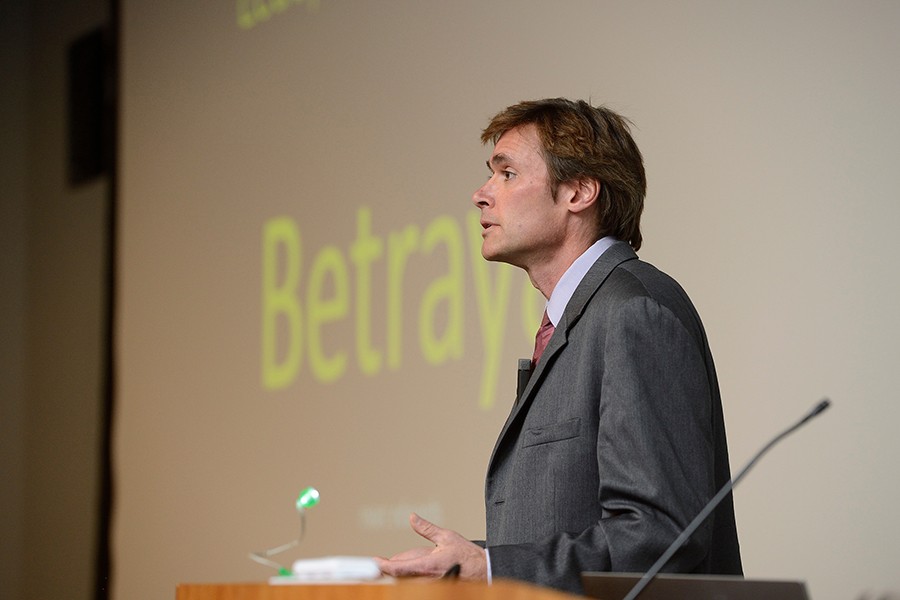 Marc Edwards, a civil engineering professor at Virginia Tech, is the scientist credited with uncovering the water crisis in Flint, Michigan, in 2014-15. But he still demands accountability for a crisis he helped expose a decade earlier in Washington, D.C., where, he said, the lead-in-water contamination was 30 times worse than in Flint.

"If you can't admit your mistakes, how can you hope to fix them? Because we didn't learn the lesson of Washington, D.C., I knew that someday it was going to happen again."
Marc Edwards, Virginia Tech researcher

Edwards—part scientist, part investigative journalist, part activist—spoke Tuesday at Johns Hopkins University's Homewood campus for the Charles and Mary O'Melia Lecture in Environmental Science. His talk focused on the line between science and activism, and the role civil engineers and scientists play in public health.

In 2001, Edwards said, Washington, D.C., made an "innocent change," switching from chlorine to chloramine in the water, which created a chemical reaction causing lead and iron from old plumbing to leach into the water supply. Six separate federal investigations to address the problem would be stalled and ultimately shuttered, however, by a fraudulent study published by the CDC.

"The Centers for Disease Control and Prevention came into town and wrote a falsified scientific report," Edwards said. "They actually claimed they had looked at the worst case people in Washington D.C., and—I kid you not—[determined that] no one in all of Washington, D.C., not a single man, woman, or child, was hurt by these three years of unprecedented lead exposure."

To reach their conclusion, Edwards said, the CDC investigators had tested blood lead levels of individuals who hadn't consumed D.C. tap water for a year, then passed those subjects off as the worst cases. He said he felt compelled to intervene when he noticed governments and agencies around the world citing the CDC report as justification for ignoring concerns about lead in water.

"The danger of scientific misconduct isn't necessarily the initial act, it's the danger that lie wreaks once it spreads," Edwards said. "The lies from this CDC study start to spread around the world and they start to hurt people.

"They found hazardous waste-levels of lead in a kindergarten classroom in Seattle, Washington," he added. "The pediatrician writes in and says 'Because of the CDC study in Washington, D.C., … we shouldn't be concerned about lead in water in our schools.' I read about this stuff in Europe and Canada—people writing to papers saying 'We don't have to worry about lead in water.'"

Flint and the long struggle against lead poisoning

Edwards launched an independent investigation into the lead levels of the drinking water in D.C. using data gathered by a local hospital. Once Edwards' results—showing the true rates of lead poisonings in the city—were published, the CDC walked back the claims in their paper, which was later characterized at a bipartisan congressional hearing as "scientifically indefensible." Edwards said that the CDC continues to claim that their only fault in their handling of the D.C. water crisis was a failure to communicate scientific findings effectively.

"If you can't admit your mistakes, how can you hope to fix them?" he asked. "Because we didn't learn the lesson of Washington, D.C., I knew that someday it was going to happen again."

In 2014, the city government of Flint made its own "innocent change" in water policy, Edwards said. The city switched its water supply from a Detroit provider to the Flint River, but "they forgot to add a corrosion control chemical to the water supply" to keep the old city pipes—lead and steel—from deteriorating.

Residents developed rashes, noticed their hair was thinning, and began feeling that bathing was a hazardous activity, Edwards said.

"We now know, with the benefit of hindsight, that this water had very high levels of Legionella and hazardous waste-levels of lead,' he said. "But no one thought to check."

The EPA began a cover up—a campaign of misinformation—similar to the CDC's fraud in D.C., Edwards said.

"I had to declare war on these government science agencies—in my own profession—which had become unethical," he said.

After a water sampling effort, Edwards enlisted the help of public school students and Girl Scout troops to perform basic scientific experiments that the news media could understand and reproduce. He became known as "Professor Plumber," and gradually the crisis garnered national media attention, prompting official hearings, firings, and indictments. Eventually, the city switched back to the Detroit water supply.

Edwards said what happened in D.C. was a prelude to the Flint water crisis, calling it "one of the world's public health disasters and tragedies," and an environmental crime perpetrated against some of the nation's most vulnerable citizens. He didn't mince words in describing the officials who played a role in attempting to cover up both episodes, calling them "unethical, lying cowards."

"I crossed that line between science and activism, and I will make no apologies for that … because we felt that the entire city was imminently and substantially in danger," he said.

And yet, he still refers to what happened in Flint as a "miracle."

"I personally believe that the miracle of what happened in Flint," he said, "was that they got caught."