After landing the sixth spot in the lottery Saturday, Alexandra Hill stepped forward to select her new home in Eager Park.

Hill, an administrative resident at The Johns Hopkins Hospital, chose a townhouse within walking distance of her work. She was accompanied by both her mother and grandmother, who had traveled from Jamaica to Baltimore to see her become a homeowner for the first time.

Hill was among dozens of Johns Hopkins employees who secured new homes Saturday in the growing East Baltimore neighborhood and took advantage of a unique, one-day opportunity: $36,000 toward a down payment and closing costs on a new house through Johns Hopkins' Live Near Your Work program.

All told, 44 Hopkins employees secured homes with the $36,000 incentive Saturday, with developer Ryan Homes releasing a few additional properties to match demand. On top of that, several other Hopkins staffers used Live Near Your Work benefits to buy homes outside of the lottery system. In total, the program supported the purchase of 48 homes in Eager Park this weekend, through more than $1.6 million in grants (four more were sold to buyers unaffiliated with Hopkins). That total included $120,000 from Baltimore City as part of their program of supplementing employer dollars.

Judging by a show of hands, the majority of the new homeowners were also first-time homebuyers.

"Johns Hopkins' Live Near Your Work program is about helping to make homeownership affordable for our employees and building strong communities here in Baltimore City," JHU President Ronald J. Daniels said. "Baltimore is an exciting place to live, and programs like this fuel that momentum. We are thrilled to be able to support such a diverse group of Hopkins employees who want to call Eager Park home."

Saturday's homebuying event is part of an ongoing effort to revitalize the Eager Park neighborhood near the Johns Hopkins medical campus with new housing, retail, offices, and community institutions. More than $1 billion has been invested in the 88-acre area since 2004, and the current development surge—the largest the area has seen—includes a 194-room hotel, a park that will serve as the centerpiece of the community, and a large number of new and renovated residential properties—many of which were sold on Saturday.

After getting pre-qualified for loans and going through homeownership counseling, the Johns Hopkins buyers gathered Saturday morning in a tent at 1050 Rutland Ave., at the center of their new neighborhood. The spinning of the raffle wheel determined their order in which they would select their new homes.

Among the options were dozens of new townhouses from Ryan Homes along with 10 newly rehabbed rowhouses offered by Emerging Developers, Tadesse and Associates, and Tu Casa Development Group.

Peggy Billingsley, a biophysics assistant research scientist for Hopkins, drew first place in the lottery. She and her husband Jordan, an architect, had their hearts set on a Tu Casa home on Washington Street that they would be able to design themselves. And, by luck of the draw, they got their first choice.

"As a newlywed couple, we're very excited to be able to design our home," Jordan said.

Buyers are expected to be able to move in throughout 2017, or in the case of certain already built Ryan Homes, as soon as this fall.

Ian Morton, a nurse at Johns Hopkins Hospital, had been looking into the Live Near Your Work program for a while, but the one-day lottery event grabbed his attention: "$36,000 was too good to pass up," he said.

Added Rahiba Ishanzai, who works in the cardiology department at the School of Medicine: "My hope is it goes as planned. This park right here will be a nice refreshing area of the city."

Among the officials on hand for the event were Maryland Sen. Catherine Pugh, the Democratic nominee for Baltimore mayor. Daniels said he'd been talking to Pugh recently when she brought up the idea of a home-buying lottery as a way to boost emerging neighborhoods in Baltimore.

Daniels told her of the already planned Eager Park event, saying "Have I got a lottery for you."

Editor's note: The number of homes sold to Johns Hopkins buyers was misstated in an earlier version of this article. The Hub regrets the error. 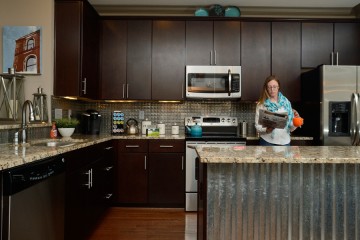 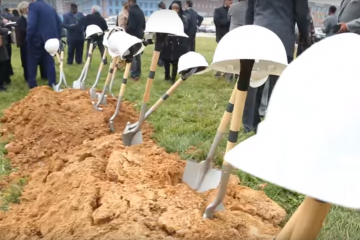