The 5.5 acres at North Wolfe and East Eager streets known as Eager Park will soon be home to a 15-story, $87 million hotel and 49 new townhomes.

The homes will start under $300,000, and several will be ready by early 2016. The 194-room extended-stay Marriott Residential Inn East Baltimore at the Johns Hopkins Medical Campus should be complete by mid-2017, developers say.

"These projects mark the next milestone in building a stronger, more vibrant East Baltimore and deepening the ties between Johns Hopkins and the neighborhood we call home," Daniels said.

The nonprofit East Baltimore Development Inc. was founded in 2002 to bring residential, retail, and recreational space to the area just north of the Johns Hopkins medical campus, while also constructing a science and technology park. A 165,000-square-foot building already underway will be home to the Johns Hopkins FastForward incubator, as well as laboratories and the offices of Johns Hopkins Technology Ventures.

Peterson smiled as he addressed the groundbreaking's attendees. "As we recruit new people to the hospital, for us to be able to say that there is new, affordable housing within a safe walk to the hospital is music to my ears," he said.

Andy Frank, special advisor to the president of the Johns Hopkins University for economic development, said that, after years of planning, the project is underway.

"For 12 years, there has been talk of building a new community north of the Johns Hopkins Hospital," Frank said. "But there never has been anything to buy until now."

Frank said he hopes the townhomes will attract Johns Hopkins Hospital employees, adding that they will be eligible for the Johns Hopkins Live Near Your Work benefit, where employees can apply for grants to help them purchase homes near Johns Hopkins.

Scott Levitan, senior vice president of Forest City–New East Baltimore Partnership, the main developer of Eager Park, says that Johns Hopkins employees and residents of the neighborhood have lots to look forward to.

"There will be an amphitheater, a pavilion, and we're going to have farmers markets and other activities that are programmed in Eager Park," he said. "There will be playing fields and a community garden and a playground for the residents of the neighborhood. It's all very exciting."

The area is already home to the new Henderson-Hopkins school, which Levitan said is the first new school built in Baltimore in 22 years.

"This has been years in the making," Daniels said. "It's a wonderful project. Today is a really good day for East Baltimore." 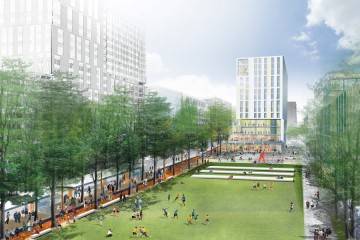