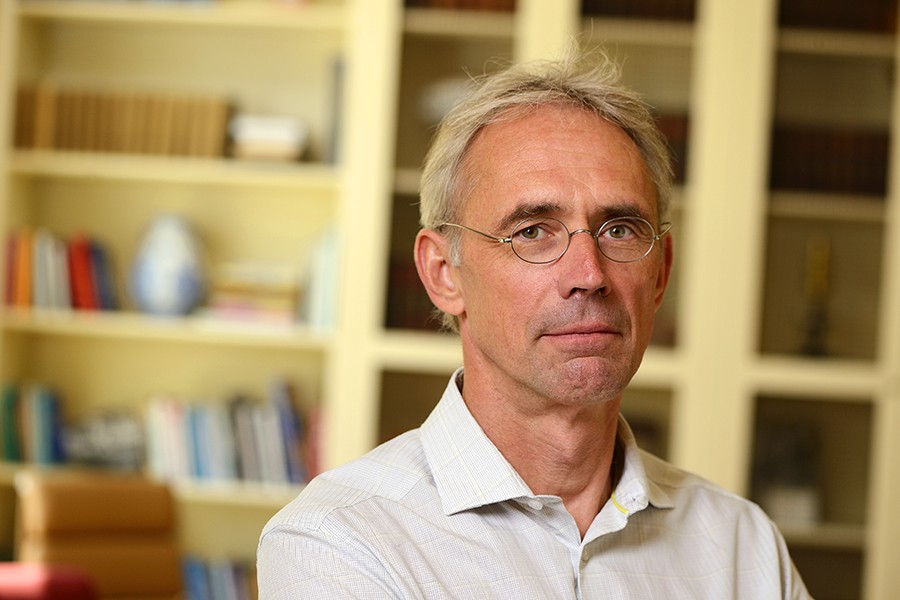 For neuroscientist Ulrich Mueller, the common thread behind his lifelong research is a fascination with the senses—how the brain perceives and processes the outside world.

Growing up in Germany, Mueller loved animals and was particularly interested in the instincts and signals in the brain driving their behavior. As he got older and discovered his knack for natural sciences, he turned to a career in neuroscience.

Today Mueller, who has joined Johns Hopkins University as a Bloomberg Distinguished Professor, is an internationally recognized expert on hearing loss and brain development.

Mueller, who goes by Uli, most recently steered the neuroscience program at the Scripps Research Institute in California. In his lab at Hopkins, he will continue his studies of the molecular workings behind auditory impairment—a line of research that aims to move beyond the traditional solutions of hearing aids and cochlear implants.

"Our real emphasis is not to work with devices but with small molecules," Mueller says, describing this as "a huge unmet medical need."

A second and related emphasis for his lab is the neocortex, a high-functioning structure of the brain that is unique to mammals. Mueller's research narrows in on the genes that cause severe brain abnormalities, such as the birth defects of microcephaly, in which the brain is underdeveloped, resulting in an abnormally small head size; and lissencephaly, in which the brain surface is smooth, having failed to develop folds.

At Johns Hopkins, Mueller joins a cohort of 23 Bloomberg Distinguished Professors, a group of scholars working to address major world problems and teach the next generation. The majority of a $350 million gift by Johns Hopkins alumnus, philanthropist, and three-term New York City Mayor Michael R. Bloomberg supports this program, which will create 50 professorships by 2018.

Mueller says he was drawn to Johns Hopkins not only for the strength of its neuroscience program but also because of the access he would have to the medical community here.

"I'll have a much better chance to interface with clinics and physicians," he says of this opportunity to translate research concepts into real-life medical solutions.

This goal complements his work with Decibel Therapeutics, the Boston-based biotechnology company he co-founded to develop novel treatments for hearing loss.

Mueller comes to Hopkins after 13 years with Scripps, where he guided the creation of the Dorris Neuroscience Center. In his lab there, he focused on the mechanical senses, which include hearing. "They are the least understood molecularly," he says, constituting an "interesting area of biology that is very important to diseases."

Mueller has conducted research into Usher syndrome, a rare and debilitating genetic disease that results in not only hearing loss but also eventual blindness. At Scripps, Mueller and his team discovered that defects in hair cells of the inner ear are responsible for the disease—and beyond that, that one of the genes affected in Usher syndrome is also linked to deafness from birth and age-related hearing loss. Mueller says he will continue his research in this area at Johns Hopkins.

Mueller's formative years were spent in Germany, where he discovered his passion for biology as a young student and went on to study at Albertus Magnus University in Cologne. He first came to the United States in the late 1980s for experimental work with Princeton University, opting to remain in the country for his postdoctoral fellowship at the University of California, San Francisco.

Before joining Scripps, Mueller returned to Europe for a four-year research stint in Switzerland. At the Friedrich Miescher Institute, he was a tenured investigator in neuroscience.

At Johns Hopkins, Mueller's appointment bridges the Solomon H. Snyder Department of Neuroscience at the School of Medicine and the Department of Biology in the Krieger School of Arts and Sciences.

"We are thrilled to welcome Dr. Mueller to our faculty," says Paul B. Rothman, dean of the medical faculty. "His prominent research program contributes vastly to our understanding of neural development and auditory system function and undoubtedly will enhance our vibrant neuroscience community here at Johns Hopkins."

Beverly Wendland, dean of the Krieger School, says Mueller's "groundbreaking work on auditory perception adds depth to the important field of sensory biology," adding that he will complement "our strong cadre of scientists and offer students many opportunities to learn even more about the rich complexity of sense organs and their interface with the brain."