A line of professionals, all in walking shoes, filed off of a bus and into the renovated 19th-century Fells Point factory that now houses the Living Classrooms Foundation.

They represented federal governmental agencies—the Department of Labor, the Department of Education, Housing and Urban Development, Veterans Affairs, the Environmental Protection Agency—and had ventured to Baltimore from Washington, D.C., and across the country to learn about tailoring federal practices to fit specific urban settings.

While touring the Living Classrooms' charter school, the government employees heard directly from students. One young man described entering the school from the juvenile justice system. With the help of lessons in woodworking—overseen by a motherly, eagle-eyed supervisor who would work with him every day—he had accelerated through the program and had already secured a job with a Baltimore carpentry firm.

"Living Classrooms is very much embedded in the communities," James Piper Bond, the foundation's President and CEO, told the tour group. "That's the whole approach—a comprehensive, multigenerational, creative pipeline of services from the cradle to the college career and into adulthood—and to be at it 365 days a year, year after year."

In addition to the Living Classrooms Foundation, other tour groups explored the Baltimore City Health Department and Project PLASE, which provides housing and support services to Baltimore's homeless. In the afternoon, the groups reconvened at Johns Hopkins University's Carey Business School for an afternoon workshop session led by the Johns Hopkins 21st Century Cities Initiative. The session focused on the role of the federal government in supporting community organizations and other public service efforts in Baltimore, particularly in the wake of last year's unrest following the death of Freddie Gray.

The day-long training sessions, facilitated in part by the 21st Century Cities Initiative, address issues of urban poverty, economic inclusion and opportunity, and neighborhood development. Additional training retreats are being scheduled for the fall, when 21CC also plans to publish a manual outlining how federal teams can cross-partner with other agencies to address problems specific to urban sites.

The spirit of collaboration between the community and federal government began before the tours had even finished. While an employee of the Living Classrooms' Safe Streets initiative described how the program had helped him get back on his feet and how he planned to open his own landscaping company, several hands shot up around the room. Members of the tour group from the Department of Labor gave him tips on finding federal grants for startup businesses. Around the room, officials from across the country helped him make sense of the resources—once seemingly unattainable—that were now within his reach.

"The Johns Hopkins 21st Century Cities Initiative aims to support cities through research, policy, and engagement with civic leadership," says 21CC Executive Director Ben Seigel, who, along with the White House and the Partnership for Public Service, helped organize the training group's Baltimore visit. "These trainings support cities and improve how the federal government partners with local agencies to make accessing federal assistance more flexible to meet a city's needs." 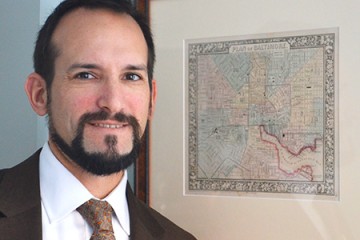