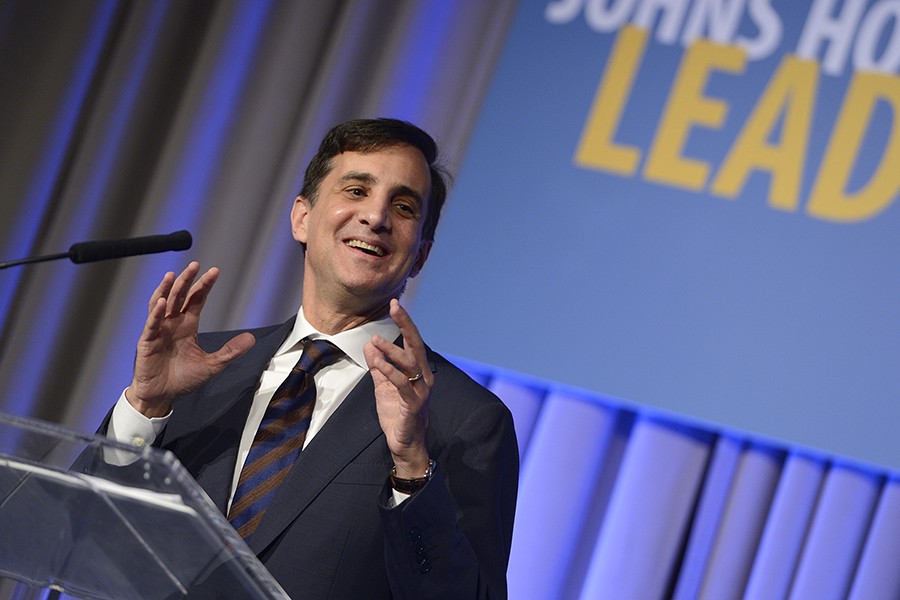 The Johns Hopkins University board of trustees has appointed Ronald J. Daniels to an additional five years as president, extending his tenure as leader of the institution through June 30, 2024.

Board chair Jeffrey H. Aronson said the action represents a clear vote of confidence in Daniels' leadership and commended the university's progress toward goals first articulated in Daniels' inaugural address in 2009. Specifically, Aronson cited the ways departments and divisions work more closely together; efforts to support students, faculty, and staff; and the university's growing support for Baltimore.

"Johns Hopkins is one of the world's great universities, and I am thrilled and humbled to be able to lead this institution."
JHU President Ronald J. Daniels

Aronson made the announcement in an email message sent Thursday to the Johns Hopkins community.

"Johns Hopkins has always been an extraordinary institution, and the trajectory of our great university has lifted ever higher in recent years," Aronson wrote. "As we look forward, the university Board of Trustees is eager to take steps to ensure that we continue along this impressive path."

Added David C. Hodgson, managing director of General Atlantic Partners, LLC, who serves as chair of the Johns Hopkins Medicine board of trustees and vice chair of the university board of trustees: "We are delighted to extend Ron's leadership of Johns Hopkins. His vision has helped to bring our institution together to tackle complex challenges and to strengthen and reinforce our relationship with Baltimore. I look forward to seeing all that Johns Hopkins will accomplish over the next eight years."

The trustees' vote marks the second time the board has signaled its appreciation for Daniels' leadership by extending his term. He took office as president of the university in March 2009 and was appointed to a second five-year term in January 2014. The board's latest action extends Daniels' contract until 2024.

"Johns Hopkins is one of the world's great universities, and I am thrilled and humbled to be able to lead this institution," Daniels said. "It is a profound privilege to work closely with our extraordinary faculty, students, staff, and alumni as we advance our great mission over the next eight years."

Two years ago, when announcing Daniels' second five-year term, Aronson said the board lauded the president for his vision, which helped to frame the goals of the Ten by Twenty, an articulation of the university's priorities through 2020. With this latest extension, Aronson said, the board recognizes the progress Daniels has made toward achieving those goals and ongoing efforts in key areas.

Aronson also noted the progress, under Daniels' leadership, of the university's largest-ever campaign, Rising to the Challenge, conceived to enable Johns Hopkins to take on some of the world's most complex challenges. The campaign's success led recently to a decision to raise its goal to $5 billion, from $4.5 billion, and to continue it one more year than previously scheduled, through June 2018.