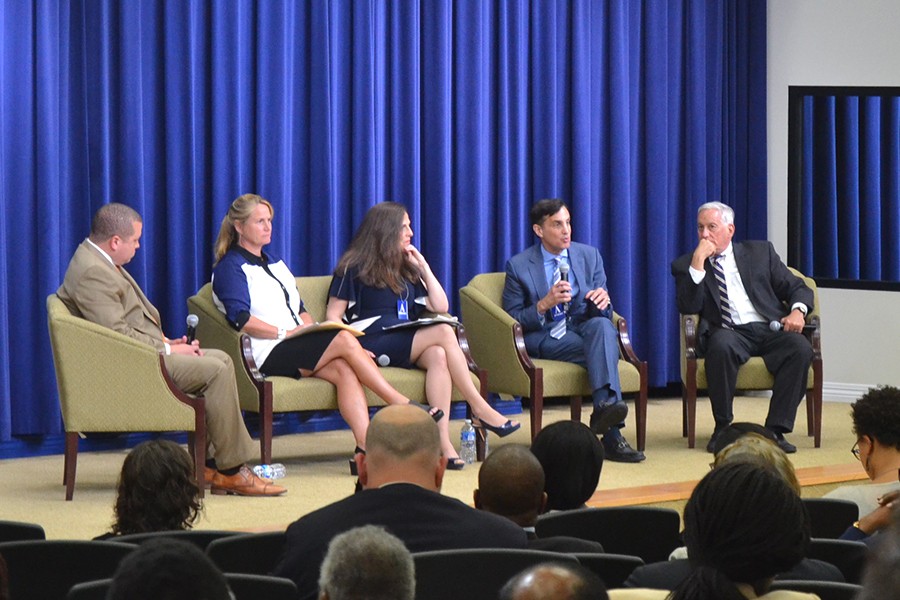 The event, titled "The Front Lines of Social Innovation: Models for Change from Baltimore City," was held in the South Court Auditorium of the Eisenhower Executive Office Building.

Daniels was among the participants in a discussion about scaling innovation for a broader impact. He was joined on the panel by Deb Smolover, managing partner for New Profit, a Boston-based social innovation organization and venture philanthropy fund; Anne Mosle, vice president at the Aspen Institute, a Washington, D.C.-based educational and policy studies organization; and Fagan Harris, president and CEO of city nonprofit Baltimore Corps.

The conversation was moderated by Walter Isaacson, a writer and journalist and the Aspen Institute's president and CEO. A recorded version of the event is available online; the panel discussion begins at approximately the 1:36.00 mark.

Daniels emphasized that it's important for institutions like Johns Hopkins to create a sense of urgency for change.

"I think it's very easy to get complacent," he said. "We know that after the unrest of last year, there was a moment for a breakthrough. And yet we also know that with each and every passing day, for as much as had happened, not enough has happened. … There are so many parts of our city that are resigned to the continuation, reluctantly, of the status quo. And I think that's where it's really important that establishment and leadership is insistent on a different trajectory."

Other speakers at the event included Baltimore City Health Commissioner Leana Wen, who addressed innovation in city government; and Sarah Hemminger, a Johns Hopkins graduate and social entrepreneur who co-founded Thread, a Baltimore-based organization that brings together teams of volunteers to support underperforming students from the city's public high schools.