Sol Kumin, a former Johns Hopkins University lacrosse player who was part of 39 wins and two NCAA Final Fours during his career with the Blue Jays, celebrated another sporting victory in Baltimore on Saturday. 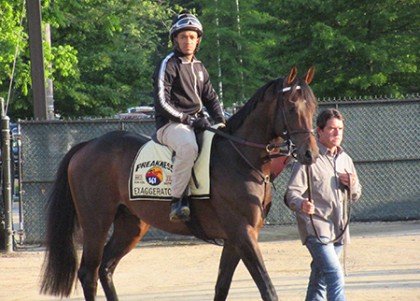 Image caption: Exagerrator at Pimlico Race Course on Friday, May 20, the day before he won the 141st Preakness Stakes.

Kumin is co-owner of Exaggerator, the 3-year-old colt who came from behind to win the 141st Preakness Stakes at Pimlico Race Course on Saturday afternoon. The horse covered the sloppy, mud-slicked 1 3/16 miles in 1 minute, 58.31 seconds, besting 10 other thoroughbreds in the field, including Kentucky Derby champion and Preakness favorite Nyquist.

"It is sweet coming back here," Kumin told The Baltimore Sun. "I love this city. I spent a lot of time back here at Hopkins. I give back to the school in lots of different ways. I had a great experience, learned a lot here, grew a lot here. So to be here and win it is awesome."

Kumin went to work on Wall Street when he left Hopkins and founded Folger Hill Asset Management, of which he is CEO, in 2014. More, from The Sun's pre-race profile of Kumin:

That same year, he and friend Jay Hanley, a developer, launched Sheep Pond Partners, Kumin's entree into racing. He'd always had fond memories of attending Preakness Day in college with his teammates, though he was admittedly more inclined to search for a good bet than enjoy the infield revelry.

It was a good instinct. One of his first Sheep Pond Partners horses was Lady Eli, a $1.45 million earner purchased as a 2-year-old for $160,000. With Head of Plains Partners this year, he bought what he called a "medium-sized piece" of Exaggerator, the 2016 Santa Anita Derby winner and Kentucky Derby runner-up.