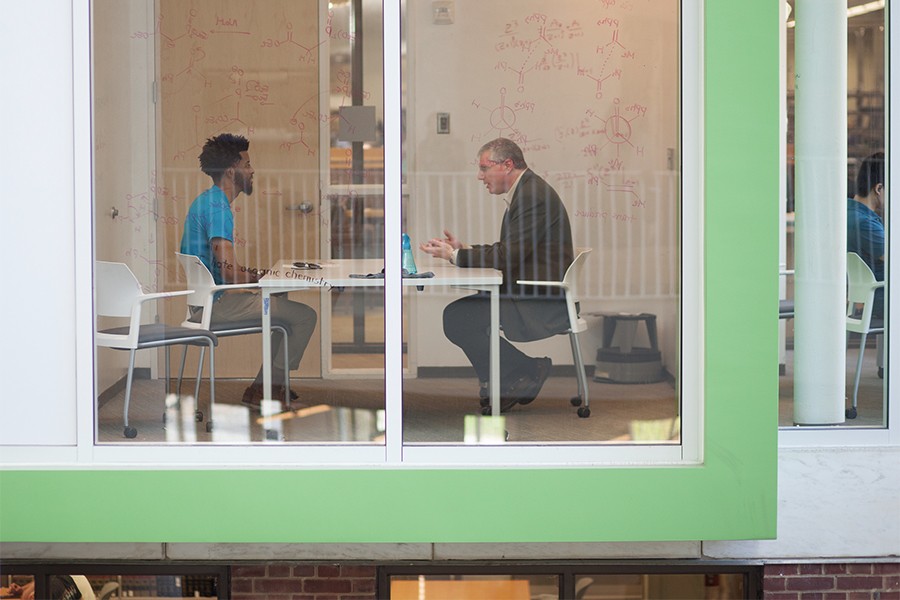 These individuals were on loan temporarily as part of a day-long event held at Brody Learning Commons and hosted by junior Selma Ahmed, who won a $2,500 Diversity Innovation Grant to support the project via the university's Idea Lab crowdsourcing website.

"The vision we had was to simply be a conversation where you can talk to someone who you wouldn't have otherwise talked to in your normal day to day," Ahmed said. "The human books represent different social groups that are generally stigmatized."

The idea behind the Human Library concept—which began in Denmark 16 years ago and has since been replicated in more than 60 countries—is to create a space where difficult questions are welcomed and vulnerability is encouraged.

Ahmed says a lecture series in one of her public health classes helped show her the value of such exchanges. One speaker who stood out was a formerly incarcerated man with a history of drug-related violence, who told the class about his experience re-integrating into society.

Johns Hopkins University sophomore Colette Aroh—identified only by her title, Black Woman—was among the participants.

"I was really interested in just what the event was about—with having people have these open discussions in vulnerable spaces," she said.

Aroh was "loaned out" two times during the event and spoke frankly with both people—one a friend who specifically requested Aroh, the other an alum who selected her based on her title. Aroh talked about her identity as a Nigerian-American and the way mental health functions within that community.

"For me, [the title Black Woman] means something different," she said. "I'm addressing that, yes, it is a part of my identity and part of who I am, but here's what it means for me.

"We didn't realize we had similar views because we were nervous about having these conversations with each other, and we realized that we had a lot of shared experiences. It's like 'Oh my gosh, why didn't we talk about this earlier?'"