She scaled flagpole to bring down Confederate flag in S.C. in 2015

Activist and community organizer Bree Newsome, who made national headlines in 2015 when she scaled the 30-foot flagpole in front of the South Carolina statehouse and removed the Confederate flag, will visit Johns Hopkins University on Wednesday as part of the JHU Forums on Race in America.

Newsome will speak at 7 p.m. in Shriver Hall on the university's Homewood campus. Tickets are not required for the free event, which concludes the speaker series for the 2015-16 academic year.

Newsome is an award-winning filmmaker, writer, composer, and singer who, according to her biography, "has always been sensitive to the essential role that art and symbols play in shaping culture and consciousness." She says, "Art is activism and activism is art."

When Newsome spoke at the "Candid Conversations in the Commons" series hosted by JHU's Office of Multicultural Affairs in February, she said that the symbolism of the Confederate flag became unbearable after nine black churchgoers in Charleston, S.C., were murdered on June 17 and photos online showed the assailant posting with the flag. "It was absolutely intolerable for that flag to fly another day," she said.

When she returns to campus for the Forums on Race in America, she will talk about her experience and her efforts to inspire others to organize, stand together, and build a world where the lives and contributions of all individuals are recognized equally.

A graduate of NYU's Tisch School of the Arts, Newsome works as a western field organizer for IgniteNC, a project of the Southern Vision Alliance and she is a founding member of Tribe, a grassroots organizing collective dedicated to empowering underserved communities in Charlotte, N.C.

Following her presentation, Newsome will participate in a question and answer session with the audience. Individuals with a JHED ID and password can view a live stream of the talk online.

The Forums on Race in America have drawn hundreds of student, faculty, staff and community members to join the conversation about issues of race and equality, starting with with a presentation by writer Ta-Nehisi Coates in April 2015 and continuing with filmmaker Dawn Porter, journalist Charles Blow, and activist Angela Davis.

The forums are sponsored by university leadership, the Center for Africana Studies, the Diversity Leadership Council, the Black Student Union, the Black Faculty and Staff Association, Latino Alliance, the Office of Institutional Equity, and Student Affairs. 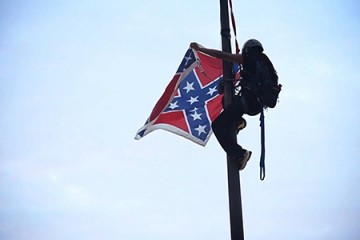 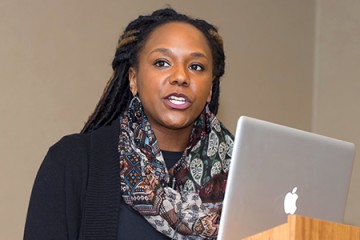 Taking down an 'intolerable' symbol