Mauro Maggioni joins JHU from Duke, where he is professor of mathematics, electrical and computer engineering, computer science 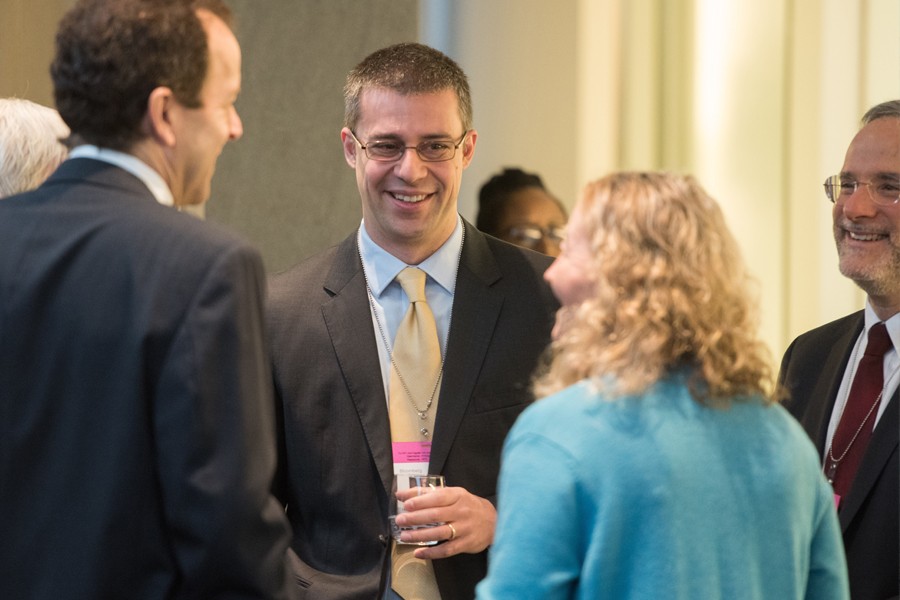 He will join Johns Hopkins from Duke University, where in 2012 he was promoted from assistant professor to full professor of mathematics, electrical and computer engineering, and computer science.

Maggioni is the 20th Bloomberg Distinguished Professor appointed across Johns Hopkins. The professorships are supported by a $350 million gift to the university by Johns Hopkins alumnus, philanthropist, and three-term New York City Mayor Michael R. Bloomberg. The majority of this gift is dedicated to creating 50 new interdisciplinary professorships, galvanizing people, resources, research, and educational opportunities to address major world problems.

Maggioni is interested in mathematical techniques for analyzing, modeling, and extracting information from large data sets that lead to smarter machine learning algorithms and scientific discoveries. With a strong foundation in harmonic analysis and signal processing, his research is focused on the analysis of high-dimensional data, graphs, and networks. Specifically, he is developing algorithms that analyze and exploit the geometry of big data in order to train machines to learn and predict patterns in data. These hidden geometric structures in high-dimensional data are pervasive and appear in completely different data types, from images to text documents to trajectories of complex dynamical systems.

"The study of big data has the potential to revolutionize nearly every field of study, from philosophy to physics to physiology," says Robert Lieberman, provost and senior vice president for academic affairs at Johns Hopkins. "Dr. Maggioni's distinguished record in teaching and collaborating across these fields and beyond makes him an exciting addition to the Johns Hopkins community and helps solidify our position as one of the world leaders in the area of big data science."

Maggioni is also focused on the harmonic analysis of networks, constructing new tools to analyze graphs at different "resolutions" in order both to simplify and compress large complex graphs and to quantify change in time-evolving networks. His pioneering work on these problems is now one of the roots of the burgeoning field of signal processing on graphs, which studies a variety of signals, from traffic on roads to neuronal activity in neuronal networks.

His work also has spanned the analysis of molecular dynamics data sets in order to find reduced representation for such high-dimensional stochastic systems, as well as for faster simulation and exploration of their configuration space. And, he developed algorithms in signal processing, in particular for the analysis of hyperspectral imaging, with applications ranging from digital pathology to target and anomaly detection. Subsequently, Maggioni's findings have been published in top journals across the fields of pure and applied mathematics, machine learning, engineering, physical chemistry, engineering, and pathology.

"I am very much looking forward to joining Johns Hopkins. I found there a wonderful interdisciplinary environment with many active, ambitious projects connecting mathematics to problems in artificial intelligence and machine learning, neuroscience, astrophysics, medicine, biomedical engineering, and robotics, among many others," Maggioni says. "I look forward to the opportunities I will have at Johns Hopkins to tackle some of the largest, most challenging problems in this area."

Maggioni's recruitment is part of a larger institutionwide effort to expand Johns Hopkins' big data capabilities. In particular, both departments with which Maggioni is affiliated have committed to further bolstering their faculties with additional big data scientists—building a cohort to establish new research programs and teach the next generation—and have secured an allocation of resources for Maggioni on the new Maryland Advanced Research Computing Center. Funded by a $30 million state of Maryland grant to Johns Hopkins' Institute for Data Intensive Engineering and Science, MARCC is a state-of-the-art digital processing facility serving Johns Hopkins University and the University of Maryland. Maggioni also will be active in IDIES, which counts fellow Bloomberg Distinguished Professors Alex Szalay and Steven Salzberg in its leadership, as director and associate director, respectively.

"We are delighted that Dr. Maggioni is joining Johns Hopkins this summer," says Beverly Wendland, the James B. Knapp Dean of the Krieger School. "As he is already a highly accomplished and collaborative scientist and mentor, we are confident that his research and training will reverberate beyond the Krieger and Whiting schools, connecting computational thought leaders throughout the university."

Maggioni will naturally bridge several divisions, interacting with faculty and students across Hopkins who are working in machine learning problems, statistical signal processing, and harmonic analysis. For example, his work on graphs and networks is relevant to researchers tackling problems in neuroscience, while his work on molecular dynamics ties with interests in the Krieger School's Molecular Biophysics program. Further, his research on hyperspectral imaging is significant to the interests of both the Applied Physics Laboratory and the Whiting School's Center for Imaging Science.

Maggioni earned his bachelor of science and master of science degrees in mathematics from the Università degli Studi di Milano in 1999 and his doctorate in mathematics from Washington University in St. Louis in 2002. He was the Gibbs Assistant Professor of Mathematics at Yale University before joining Duke in 2006. Maggioni was elected a fellow of the American Mathematical Society in 2013. He has received a Sloan Research Fellowship from the Alfred P. Sloan Foundation, a National Science Foundation CAREER Award, and the Vasil A. Popov Prize, which recognizes young mathematicians for distinguished research accomplishments in approximation theory and related areas of mathematics.

"Data-intensive science is of critical importance to much of the research being pursued in our school," says Ed Schlesinger, the Benjamin T. Rome Dean of the Whiting School of Engineering. "Dr. Maggioni's recruitment invigorates and strengthens these efforts to integrate the most advanced computational methods into our research and provide academic excellence for the next generation of scientists. We look forward to enthusiastically welcoming him and his family to Baltimore."

Anna Coppola, Maggioni's wife and a senior research scientist in the Sarah W. Stedman Nutrition and Metabolism Center at the Duke Institute of Molecular Physiology, is joining the Krieger School's Department of Biology. Coppola studies the effect of dietary nutrients on metabolic regulatory mechanisms, with particular emphasis on the role of proteins and amino acids in the development of behavioral and metabolic diseases.