Filmmaker Spike Lee, whose acclaimed works including Do The Right Thing and Jungle Fever have challenged assumptions about race and prejudice, will speak at Johns Hopkins University's commencement ceremony on May 18.

A writer, director, actor, producer, author, educator, and entrepreneur, Lee will receive an honorary doctorate of humane letters at the event, where about 7,000 Johns Hopkins undergraduates, graduate students, and professional students will also be awarded their degrees.

Lee's dozens of "Spike Lee Joints" notably include the Oscar-nominated Do The Right Thing, which The New York Times called a "provocative, insightful meditation on simmering racial tension"; Jungle Fever, about an interracial relationship; and Malcolm X, a biopic of the civil rights activist that was nominated for two Oscars. His 2006 HBO documentary about Hurricane Katrina victims, When the Levees Broke: A Requiem in Four Acts, won a Peabody Award and Emmy awards for Outstanding Directing, Outstanding Picture Editing, and Exceptional Merit in Nonfiction Filmmaking. He revisited New Orleans for HBO in 2010 and won another Peabody for the sequel, If God Is Willing and da Creek Don't Rise. 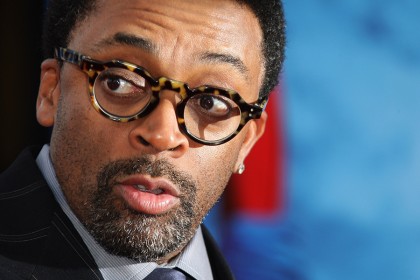 "More than 25 years since the release of his groundbreaking Do the Right Thing, Spike Lee's films continue to resonate from the stoops of Bed-Stuy to the classrooms of Johns Hopkins," said JHU President Ronald J. Daniels. "On screen and off, as a filmmaker and educator, Spike Lee challenges all of us to confront the pressing questions of equality and justice that shape our country and inspire the next generation to find their voices. I know he will challenge and inspire a graduating class whose voices can—and will—make a resounding impact on our world."

Born Shelton Jackson Lee in Atlanta and raised in Brooklyn, New York—the setting for many of his films—Lee graduated from Morehouse College with a degree in mass communications and went on to earn a Master of Fine Arts Degree in film production from New York University's Tisch School of the Arts, where he is now artistic director of the Graduate Film Program.

Just out of school in 1986, he released his debut film, She's Gotta Have It, which won the Prix de Jeunesse Award at the Cannes Film festival. His breakout Do The Right Thing came just three years later. The Atlantic called the film "one of the few truly great films of the 1980s: an intelligent, matter-of-fact examination of race in America and also a vibrant, funny slice of New York life."

And Lee's been making movies ever since. School Daze, Mo Better Blues, He Got Game, Clockers, Bamboozled, Inside Man, 25th Hour, 4 Little Girls, The Original Kings of Comedy, and Summer of Sam are just some of his feature films released over the last three decades.

Lee acted in several of those movies, and he also became known for casting up-and-coming, diverse talent including Samuel L. Jackson, Kerry Washington, and Rosie Perez.

Lee has also put his signature on numerous music videos and commercials. He directed dozens of videos for top artists including Michael Jackson, Miles Davis, Mariah Carey, Eminem, and Stevie Wonder. His commercial work includes spots for Levi's, Capital One, and Chevrolet—including the car company's recent "Throw Like a Girl "campaign. In his ads for Nike's Air Jordan sneakers, Lee, a well-known New York Knicks super-fan, starred with basketball star Michael Jordan and reprised his character Mars Blackmom from She's Gotta Have It.

Lee is the founder of 40 Acres and a Mule Filmworks and also the author of several books, including titles about making movies, sports, and some picture books for children that he wrote with his wife, Tonya Lewis Lee.

Late last year Lee focused on the issue of gun control, releasing Chi-Raq, a movie about gang violence in Chicago, and a series of public service announcements for the organization Everytown for Gun Safety. The PSAs featured NBA players, including Stephen Curry and Joakim Noah, speaking out against gun violence.

More recently, even though Lee was awarded an Honorary Oscar in November, he boycotted February's Academy Award ceremony to push for more diversity in Hollywood.

The 2016 Johns Hopkins commencement ceremony, which will be held for the first time at Royal Farms Arena in downtown Baltimore, is not open to the public. More information about commencement events is available online.