With so many sounds in the world, how does the brain decide which ones get your attention? Researchers at Johns Hopkins think a bat's brain could hold some answers.

You're at a crowded, noisy party. The music is loud; multiple conversations are going on simultaneously. But when someone behind you says your name, you hear it and quickly turn in that direction.

The same sort of thing happens with bats, leading Johns Hopkins University researchers to discover how a bat's brain determines what's worth paying attention to. The findings, which have implications across animal systems, were published this month in Proceedings of the National Academy of Sciences.

"With so many stimuli in the world, the brain needs a filter to determine what's important," said Melville J. Wohlgemuth, the lead author and a postdoctoral fellow in JHU's Department of Psychological and Brain Sciences. "The bat brain has developed special sensitivities that allow it to pick out sounds from the environment that are pertinent to the animal. We were able to uncover these sensitivities because we used the perfect stimulus—the bat's own vocalizations."

To navigate as they hunt in the dark, bats use echolocation—they make certain high frequency sounds as they fly, then listen for echoes bouncing off objects in front of them to orient themselves. The bat pays attention to some of these echo sounds, but not all of them, researchers say.

Wohlgemuth and co-author Cynthia F. Moss, a Johns Hopkins neuroscientist, wanted to figure out which sounds would be deemed "important" enough to evoke responses from neurons that are involved in orienting behaviors, such as turning towards a sound.

The researchers experimented with five big brown bats, playing them a variety of sounds while monitoring their midbrain activity. They played recordings of natural chirps, the actual sounds bats made as they hunted. They also played artificial white noise and sounds between the two extremes. All of the sounds were identical in amplitude, duration, and bandwidth.

Although sensorimotor neurons in the bat midbrain reacted to all of the sounds, the neurons involved in stimulus selection—those that guide orienting behaviors—responded selectively to a subset of the natural chirps.

"That's really important because it showed that if a neuron reacts to all stimuli, any sound in the environment, it doesn't do an animal any good," Wohlgemuth said. "You need the selectivity."

Because all mammals share a basic brain organization, these findings suggest for the first time how mammals, including humans, likely choose which stimuli deserve attention.

"Bats produce the sounds that guide their behaviors, and consequently, we know what signals are important to them," Moss said. "By comparing activity patterns of neurons to biologically natural and artificial sounds, we learn general principles of sensory processing that apply to a broad range of species." 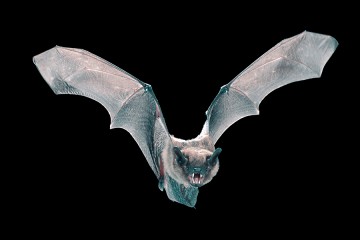