The Blue Jays (1-0) scored the game's first three goals and never trailed in their season-opener, but the Midshipmen (1-1) rallied to force overtime with a pair of goals in the final three and a half minutes, including the equalizer with 27 seconds to play. Navy goalie John Connors came up with a pair of saves in the first overtime period, but in the second extra session, John Crawley found Stanwick cutting from behind the net, and Stanwick beat Connors to give Hopkins the win.

JHU led 7-6 entering the fourth quarter, during which the teams combined for nine goals.

Brown's six goals pushed his career total to 124 and extended his nation's-best goal-scoring streak to 35 games, the longest streak by a Johns Hopkins player since Terry Riordan's 56-game run from 1992-95. Stanwick added three assists to go with his game-winning goal, Crawley scored twice, and Drew Supinski added a goal and an assist. Sophomore goalkeeper Brock Turnbaugh, making his first career start, had 13 saves.

Johns Hopkins returns to action Saturday at UMBC at 1 p.m. Feb. 20 at Loyola at 1 p.m. (Editor's note: The game against UMBC, originally scheduled for Feb. 13, has been rescheduled for March 30) 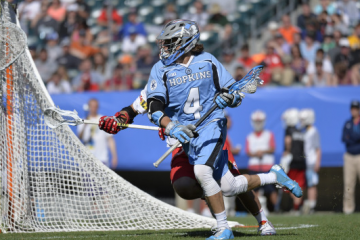