Senior Ryan Brown, who scored a school-record 61 goals a year ago, returns to lead the defending Big Ten tournament champions

After winning the inaugural Big Ten men's lacrosse tournament and advancing to the NCAA semifinals in 2015, Johns Hopkins has its sights set even higher in 2016. Despite facing a makeover on defense and needing to replace one of the best attackmen in school history, this year's team has the same lofty goal that every Blue Jays lacrosse team has—winning a national championship.

To reach that goal, coach Dave Pietramala and the Blue Jays will rely heavily on a dynamic tandem on attack, an experienced midfield, and an emerging faceoff unit and hope that a talented but inexperienced defensive unit comes together.

Below is a closer look at the 2016 Blue Jays, who open the season Tuesday at Navy.

Senior attackman Ryan Brown scored a school-record 61 goals a year ago, earning Big Ten Offensive Player of the Year and second-team USILA All-America honors. He was the primary beneficiary of the passing talents of Wells Stanwick, who graduated in 2015 after recording 124 career assists. Brown enters his final year with 118 career goals and a 34-game goal-scoring streak.

Brown will still be taking passes from a Stanwick, but it will be sophomore Shack Stanwick, who burst on the scene last year with a 28-goal, 23-assist effort that made him the first Hopkins freshman to top the 50-point mark in more than 20 years. His continued development will be essential as opposing defenses key on Brown.

Junior Wilkins Dismuke is the most experienced player in a three-man battle for the other starting spot on attack, along with freshmen Alex Concannon and Kyle Marr. All three figure to see significant time as the season progresses. Senior Liam Giblin, who is battling back from an offseason injury, and freshmen Henry Grass and Jake Fox, could also see time on attack.

Two other returnees from the second midfield, juniors Cody Radziewicz and Kieran Eissler, will be counted on to increase their production. With 60 career combined games played between them, they are one of the most experienced second-line tandems in the nation and work well together.

An emerging presence at midfield this season could be sophomore Patrick Fraser, who opened eyes last season as a key member of a Johns Hopkins extra-man unit that produced 38 goals. Four sophomores—Thomas Guida, Brinton Valis, Sam Lynch, and Drew Pirie—are among the returning players battling for time, and freshman Drew Supinski—the No. 4 recruit in the nation, according to Inside Lacrosse—could see immediate time on one of the top midfield units after an impressive fall and strong showings in preseason scrimmages.

The biggest personnel losses for Hopkins come at the defensive end, where two starters on close defense, the starting pole, a top short-stick defensive middie and a man-down specialist must all be replaced.

Junior Nick Fields returns as the leader on defense after grabbing honorable mention All-Big Ten honors last season. As he did in 2015, Fields will routinely draw the assignment of marking the opposition's top attackman; his ability to win that matchup is crucial to the overall success of Hopkins on defense.

Among the others who figure into the team's plans on defense are senior Eddie Morris, juniors Riley DeSmit and Trevor Koelsch, and sophomore Sam Bamigboye.

The long stick middie role vacated by the graduation of Michael Pellegrino, a two-time All-American, figured to be filled by some combination of senior co-captain Derrick Kihembo, junior Austin Spencer, and freshman Robert Kuhn. Kihembo was second on the depth chart last season and played in 15 games behind Pellegrino, while Spencer was a two-year regular on defense at UMass before transferring to Johns Hopkins last summer.

Junior Joe Carlini has been a regular as a short stick defensive middie since arriving and is now the leader of that group. Sophomores Tal Bruno and Chris Hubler; freshmen Lane Odom, Danny Jones, and Ryan Coulter; and senior Kelton Black, could all see time alongside Carlini.

A three-way battle has emerged for the starting spot as the Blue Jays look to replace Eric Schneider, who started 33 games in his career and played a majority of the minutes last season. Senior Will Ryan, sophomore Brock Turnbaugh, and freshman Hunter Sells carried have each made a compelling case for the job during fall and preseason practices.

Ryan is easily the most experienced of the bunch, having played in 10 games—including two starts—last season. He helped jump-start JHU's late-season seven-game winning streak with a nine-save performance in a double-overtime win against Penn State.

A year ago, Hopkins won just 52.2% of its faceoff attempts. With a revamped defense, better production will be counted on as that unit develops.

Pietramala is confident that he has four players capable of succeeding at the faceoff X this season. Senior Craig Madarasz and sophomore Hunter Moreland figure to lead the way for the Blue Jays. Madarasz missed the entire season a year ago, but won 22 of 42 faceoffs as a sophomore in 2014. Moreland emerged last season as one of the top young faceoff specialists in the nation, winning 111 of 202 draws (55%). Juniors Kevin O'Toole and Matt Ledwin handled the faceoff chores in the fall when Madarasz and Moreland were working their way back from injuries and could also be called upon. 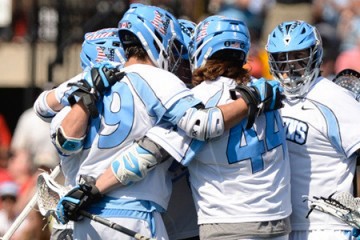